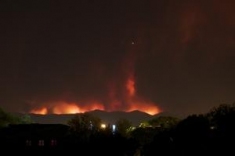 The Risk to Waste Stored at Area G

We pride ourselves here at Nuclear Watch New Mexico on trying to stick to the facts as we best we know them and not being alarmist. That said, the Las Conchas Fire that has now crossed the Los Alamos National Laboratory’s (LANL’s) southwestern boundary is a real threat. For starters is the mind-blowing fact that in just 30 hours this fire has grown bigger than the notorious 2000 Cerro Grande Fire which burned ~48,000 acres (~5,000 acres within Lab boundaries), and traveled in a beeline 12 miles to get to the Lab. With forecasted days of strong winds and gusts and high temperatures it’s hard to say where this fire might go and what it might do. Pray for rain.

We are not so concerned about the hardened facilities at the Lab constructed of concrete and cleared of combustible materials (i.e., trees and brush) around their perimeters. We doubt that there would be any breech to their containment that would let contaminants escape (with one caveat below). But we do have concerns. One is the fact that over 6 decades the Lab has blown up a lot of uranium and depleted uranium in dynamic high explosives experiments in the general area in front of the fire. We don’t know to what extent the shrapnel or debris has been cleaned up and could possibly be aerosolized.

Another concern, given both the velocity and ferocity of the Las Conchas Fire, is whether any Lab facilities loose their power and back up generators failed to work for whatever reason. In that case containment systems could fail with unknown safety implications.

But our biggest concern is whether the fire could reach the fabric buildings (essentially very large tents) at Technical Area-54’s Area G that store some 20,000 barrels of plutonium-contaminated wastes from nuclear weapons research and production. We recommend that the public use satellite-based fire detection data and fire intelligence information published by the US Forest Service to monitor the situation (see related post for instructions on how use it). From that we can “see” that the leading edge of the fire is a little more than three miles from Area G.

The good news is that the fire should slow down if and when it heads toward Area G because it will have to leave the mostly ponderosa forest into pinon and juniper country (which doesn’t crown fire like ponderosa). Also, the Lab has cleared trees and vegetation around Area G, and the fire would have to jump some major canyons just to get there.

So here’s hoping the fire doesn’t get anywhere close to Area G. But watch out if it does. The public should be concerned and really pay close attention. It might be a good time to take a road trip somewhere away from being downwind. This is one fire that cannot be underestimated.