The Slow Ladder of Social Change: Conflict and the Legal System by Leemor Valin

When we were planning the blog theme of conflict transformation, one of the areas we were interested in exploring was how law is used as a tool to transform conflict. There is, of course, the obvious and traditional way in which the rule of law is enforced, but we were wondering about the deeper and more creative uses of law. Then I met Leemor Valin, a Toronto-based lawyer, who had a powerful story to share about her role in last year’s G20 summit in Toronto, Ontario. It was incredible to hear her speak as both an activist and a lawyer simultaneously. It’s not such an unusual blend of identities, but it is one I rarely hear articulated so well.

Leemor’s article, The slow ladder of social change: conflict and the legal system, which was specially written for the Kindle blog, explores the relationship between law and activism, using her experiences as a legal observer during the G20 summit as a case study. Her forthright and personal account gives a glimpse into the push and pull of an activist fighting for proper representation, while demonstrating an astute understanding of how law can be a useful, and even necessary, ingredient for social change.

The Slow Ladder of Social Change: Conflict and the Legal System
by Leemor Valin

June 27th marked the one year anniversary of the day that I got arrested and detained during the G20 summit in Toronto. I am a lawyer, and on June 27th I had been a lawyer for exactly 11 days before hitting the streets as a volunteer legal observer with the Movement Defence Committee during the G20.

When I first found out that the G20 was going to be held in downtown Toronto I knew that the city and its citizens were setting itself up for a weekend of miscommunication and casualties. During my years as an undergraduate student at McGill University I had volunteered as a legal observer during the April 2001 Free Trade Area of the Americas Summit in Quebec City (FTAA Summit). This was my first glimpse at an international summit protest and it was terrifying. There were mass arrests (not as many as the G20 in Toronto), but the main strategy used during the FTAA Summit was tear gas and rubber bullets. In Toronto last summer, the strategy was brute force. 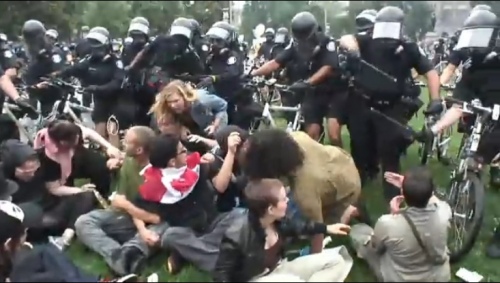 During the G20 I saw and experienced horrific things, things that I would never have expected to happen in my country. Although I felt it coming, I could not believe that the reality was occurring, at first in front of my face, and then happening to me.

I will quickly give a breakdown of my experiences during the summit, and then I will put on my lawyer hat and say a little bit of what one year has given me in terms of perspective on the G20 and on the role I feel the legal system has to play in broader societal conflicts.

I volunteered as a legal observer with the Movement Defense Committee, a branch of the Law Union in Toronto, during the week leading up to the G20 and on the weekend itself. I was paired up with a man named Kevin, who I later found out was an undercover cop, spending about two full days with him.

On that infamous Saturday Torontonians and people across North America and abroad watched the media focus in on burning cars and smashed windows. On the ground there was an entirely different story to tell, and one that I am still trying to figure out today.

That day I witnessed too many people being brutally arrested and beaten by our police men and women. Most of what I saw happened at Queens Park, the designated protest area, over the course of four hours. The way they arrested people was what was so shocking. First the police would rush the people milling around Queens Park. Then they would break out from their police line, and about five police would jump on one person and drag them back behind the police line. All you could see were several large navy blue clad bodies with arms and legs heaving on top of one disappearing body, and then that person was dragged away. I remember one young man that was sitting on the ground with his notebook out; he had on burgundy corduroy pants and a vest and could not have been more than 20 years old. When the police line rushed the crowd he was enveloped, taken back behind the police line, and then disappeared. I remember thinking how innocent this young man looked, how he was in the wrong place at the wrong time. It could have just as easily been me.

Most of us were too shocked to leave Queens Park while this was happening. We were also indignant that the police would not let us stay anywhere on the street despite the fact that no one was even protesting at that point. Maybe just sticking around was our protest. I stayed also because I felt it was my duty to witness.

That night I could not rest. I kept thinking of all those people that were brutally arrested and I decided at about 11:30pm to join the first group doing jail solidarity in front of the temporary detention centre at Eastern Ave. and Pape St., a non-descript corner in the east end of Toronto, about 4 kilometres from where the G20 was taking place. 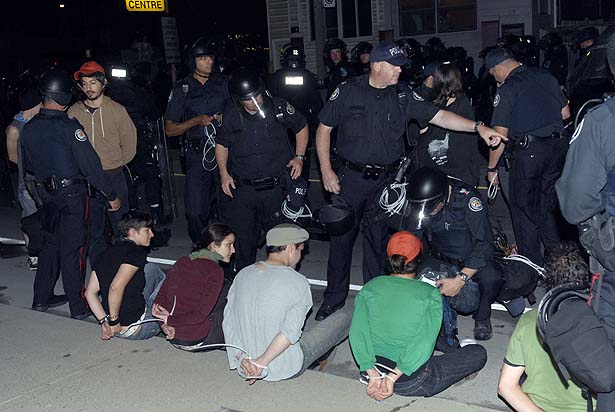 Leemor being arrested. She is on the right in the green shirt and orange hat which had the words Legal Observer printed on it.

I won’t go into all the details, but at about 1:00 am I was arrested along with approximately twenty other people for not leaving the area fast enough, although it was an entirely peaceful and quiet gathering. I was detained for 12 hours, but I had it easy. Some of the others arrested at the same time as me were kept for over 20 hours without permission to make a phone call, without sufficient food or water, and in cells that were too cold and bright to fall asleep in. Afterwards I met people who had been held for close to 30 hours in those conditions.

The police and guards in the detention centre feigned ignorance pretending not to know what rights the Canadian Constitution bestows upon its citizens. When I asked my male guard if it would not be more appropriate to have a female guard as there was no door to our portable washroom, the answer was “I don’t know, we will see”. “I don’t know, we will see” was the only answer.

You do not know what Kafkaesque means until you experience an entire suspension of the rule of law under bright fluorescent lights and a cold cement floor. As a person without a legal background in that setting, it was disturbing enough. No one could understand the extremity of it. As a lawyer, I felt two feelings simultaneously: one was a feeling of shame that people were being treated this way and that the law of the country and its constitution, was blatantly ignored; and the second feeling was one of respect for the fact that these laws even existed, even though they were not being followed. I was proud, in that moment, to be someone who could advocate on behalf of those “forgotten laws”.

I did not always feel that proud. I spent years debating whether I should go to law school, and I spent my entire law school career complaining, feeling that the law could do little to nothing to actually affect change.

I still feel that the most significant change that happens in society starts from the bottom up in grassroots movements and not through the legal system. There is not enough space here to list all of the movements in history that have changed how we live and how we approach others, but the women’s liberation movement, rights for and respect for sexual orientation, and Native rights are just a few. In each of those cases, the last step in institutionalizing and normalizing citizen’s rights was for them to be cemented into law.

Conflict seems a necessary part of the puzzle and is unavoidable. Change in society happens when the message of the quiet voice becomes the desire of the whole. Judges will only rule against the “status quo”, when the status quo has in fact already shifted and is already transforming into something else. If one looks to the history of decision making in Canadian courts, one can see the development of ideas becoming norms. Once upon a time, not so long ago, if a woman said nothing while being raped, she could have been found by a judge to have consented to the rape. Now if a woman is raped and it goes to court, her silence can mean that she was non-consenting [For reference see: R. v. Ewanchuk, [1999] 1 S.C.R. 330]. This change only happened after decades (the Ewanchuk case was only in 1999) of lobbying by women against violence groups, Take Back the Night walks on campuses in Canada and the United States, and other countless ways people have been advocating for women’s safety in sexual encounters with men.

This takes me back to the G20 and what occurred there. What I experienced during and after the G20 gave me insight into another important function of the law. It was only through experiencing the rule of law disappear, that I realized how important it really is.

In the aftermath of the G20, the lawyers were and are the only ones able to hold the police truly accountable. For days, as hundreds filed through bail court, defense lawyers of this city worked around the clock to defend those who had been abused and falsely charged. Only recently has the Toronto Star played a role in bringing the police to justice, but they only did so when it was safe, and when the images of burning police cars are no longer moneymakers.

The act of cleaning up after a conflict has died down is not only true for the G20 and other conflicts like it, but on a larger scale. On May 31, 2011, Ratko Mladic, the person who instructed thousands to be massacred and raped in Serbia in the early 1990s, is finally being brought to justice at the International Criminal Tribunal for the former Yugoslavia at The Hague. When he is convicted, perhaps some sense of resolution will be felt for those who survived.

Today, I am still wary of the effectiveness of the legal system, but I feel privileged to be a part of a profession that is there to pick up the pieces after the conflict is over. In the end, the law helps us adapt to what is coming, or to what is finally here.

Leemor is a lawyer and social change participant. She makes her home in Toronto, ON.