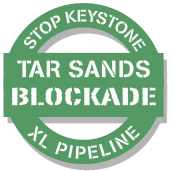 TSB has been engaged in our active, dynamic campaign for over a year with numerous milestones marking our accomplishments.

Currently, we are working with a litany of documentation of damaged Keystone XL pipe to illustrate how inadequate tar sands pipeline regulations endanger families and the environment and why Keystone XL in Texas and Oklahoma must be rebuilt from scratch due to TransCanada and their construction contractor Michels’ flaunting of what barebones pipeline regulations actually exist.

Here are some videos documenting some important moments over the last year of our campaign.

This is local news coverage of Tar Sands Blockade’s first direct action against TransCanada’s Keystone XL tar sands pipeline from August 29, 2012 in Livingston, Texas where a group of Texans locked themselves to a pipe carrying truck at the entrance to a TransCanada pipeyard, effectively blocking the entrance for the entire day.

This is a humorous video of an ariel blockader during TSB’s three-month-long Winnsboro Tree Blockade creatively recovering a warm blanket that had fallen from their platform 80 feet in the air into a tree below on a cool October evening.

On Thursday, November 29th, lifelong friends, Diane Wilson and Bob Lindsey, participated in an action with members of Tar Sands Blockade and CodePINK. This video unpacks the rationale behind the action from Bob’s perspective and shares concerns from Manchester residents in the words of a community member.

A video of TransCanada Quality and Compliance Manager, Tom Hamilton, being disrupted while giving a glowing speech about TransCanada’s history of regulatory compliance. This is the action where Tar Sands Blockade unveiled the photo evidence of shoddy welds on KXL South.

Tar Sands Blockaders were amongst the only people daring to break ExxonMobil’s martial law and media blackout in the aftermath of the massive tar sands spill in Mayflower, Arkansas in early April 2013. Our coverage made national and international news.

Our work continues and, with the ongoing support of the Kindle Project, we will continue to push the difficult conversation on tar sands exploitation forward.

With the Kindle community’s support, Tar Sands Blockade is bound to fulfill the promise of its name to become a force to-be reckoned with and one determined to challenge the entire tar sands industry’s interest in exploiting the Gulf South.