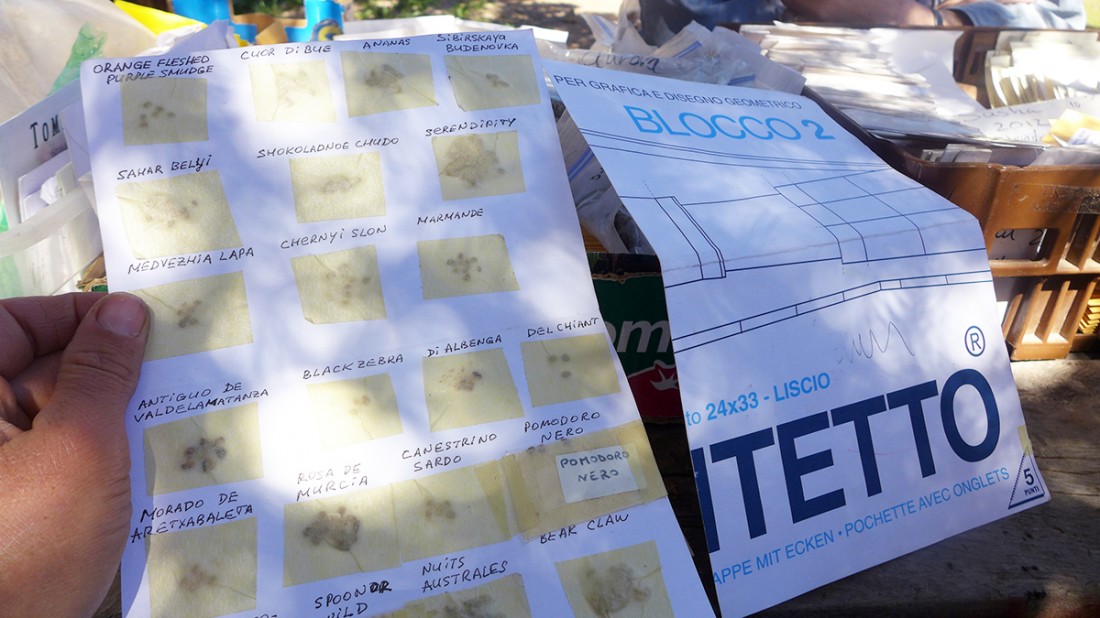 Seed Broadcast
Seed Broadcast is a generative project exploring grassroots food and seed sovereignty through collective inquiries and hands-on creative practices. Throughout…
http://www.seedbroadcast.org/
Technology and seeds have long been intertwined in a complex field of relations. Throughout history plants have cycled from seed to seed and humans have interjected their desire to be a part of this process, selecting, storing, and growing out these plants year after year for millennia. This encoded technology of relations was fed with an intention towards care and resiliency to nurture not only people, but also a polyculture community of the familiar. Relatively recently this intention has shifted towards engineering botanical processes to build mono-agricultural empires, create populations of dependent passivity, and dominate the more than human.

Since 2011, SeedBroadcast has been examining these territories through performative engagements as artists, farmers, gardeners, teachers, and collective operatives, while rethinking the term agri-Culture. Project concepts and methodologies are founded in a space of the grassroots, where culture, creativity, collaboration, and agency are coupled with open source technology, seeds, agro-ecology, rhizomatic networks, and most importantly the stories that bring these all together.

You can read more about these events at the Mobile Seed Story Broadcasting Station blog: http://seedbroadcast.blogspot.com/ 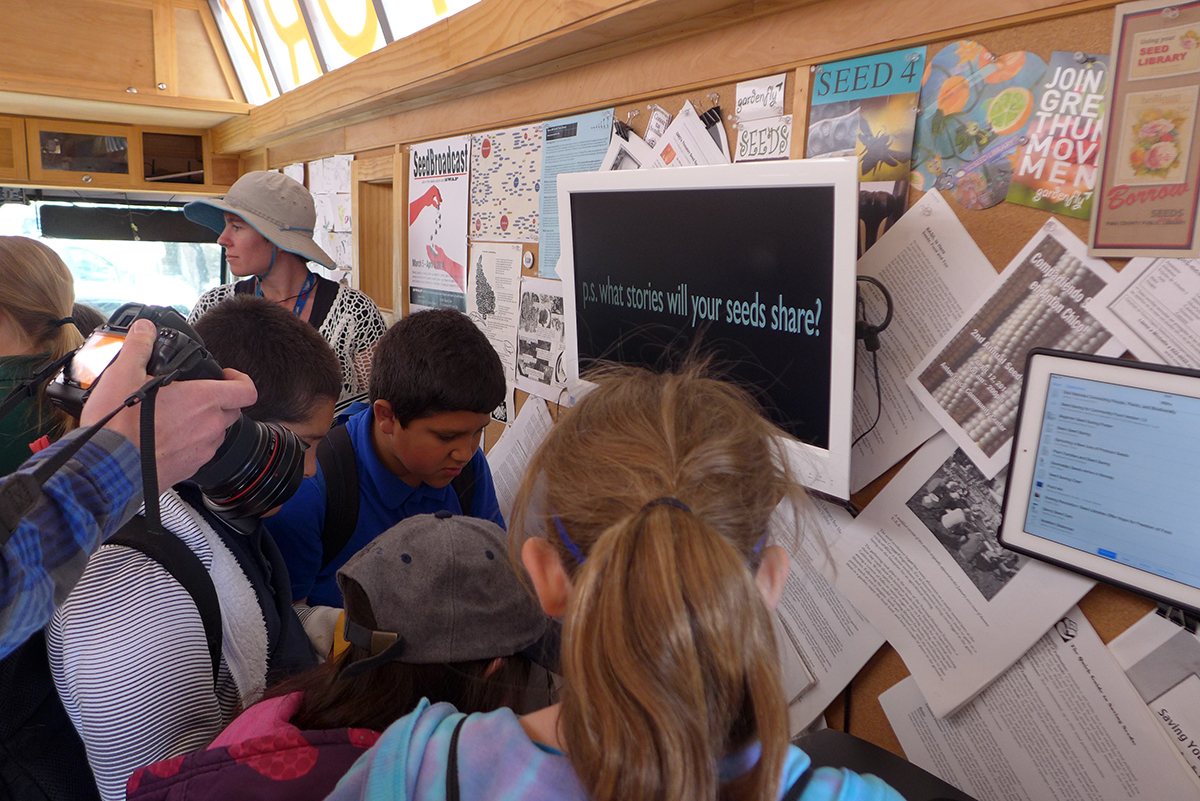 The 2014 regional MSSBS tour took us vertically into the high and dry Rocky Mountains with events at MountainFilm Telluride and many visits to high-altitude food producers and seed savers in Mancos, Dolores, Ridgeway, and Westcliffe, Colorado. The mantra in this beautiful and yet harsh environment is to develop adaptability through encouraging creative resiliency in plant life, seed saving, and through finding passive energy systems for extending the growing season and protecting crop failure from the weathering mood of climate change. 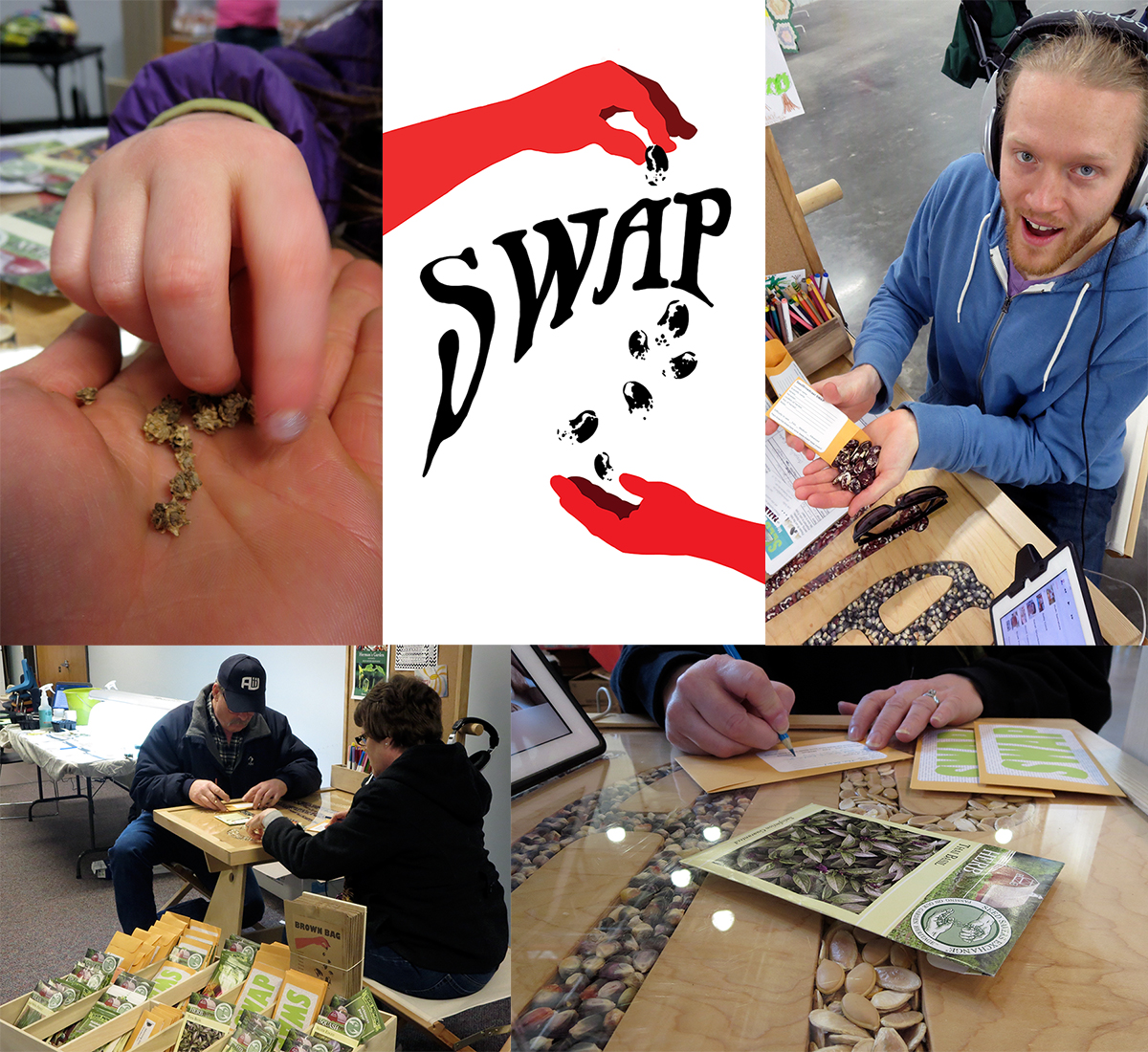 SWAP grow kit, pops up and seed swaps around Iowa

Finding ways to build collaborative partnerships beyond our region has led us to a new experimental platform called SWAP. The kick-off for this project occurred in the heart of corn country, in Iowa. Partnering with an organization called Exuberant Politics and directed by a local farmer and artist, SWAP shared the technological SeedBroadcast structure as an experimental “grow-kit” to be used locally to interrogate agri-Culture and local issues. Local community members used it to collect seed stories, bring awareness to issues of GMO, pesticide drift, and seed saving, and help inspire local open-source networks.

This year we have been expanding our processes to deepen the impact and implementation of our radical seed work. One of the ways has been to offer seed story workshops to encourage people not only to develop the practice of saving seeds but to also save the cultural heritage of that seed. As we have heard many times over “If we lose our seeds we lose our culture.” And as we are witnessing, in many parts of our world, if we lose connection to our culture we lose our land-based un-tampered-with seeds. 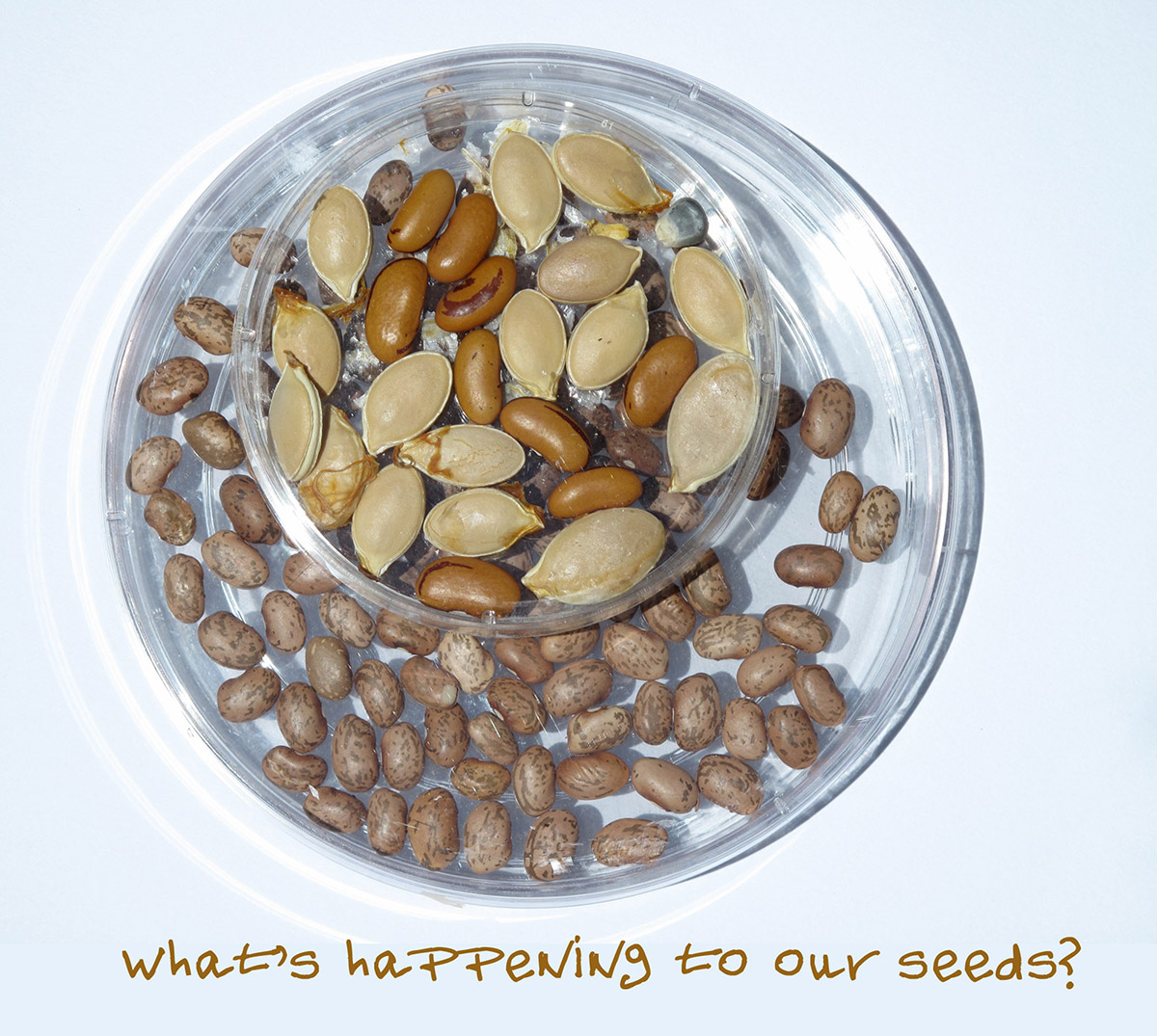 The stories held in each seed and the stories that each of these seeds share with us are as important to save and share as the seeds themselves. They are intertwined and inseparable.

We have held onsite seed story workshops as part of Seed School at Native Seed Search in Tucson and at various New Mexican schools. We also have been seeding seed story practices through on line conversations and exchanges with the Hummingbird Project in Cleveland, Ohio. We are hoping to expand our online action workshop presence in the future and are in the planning stages for a series of workshops at the Institute for American Indian Arts in Santa Fe, New Mexico and at Santa Fe Art Institute as part of the Food Justice artist residency year.

One of SeedBroadcast’s various dispersal, broadcasting and collaborative tactics is our biannual SeedBroadcast agri-Culture Journal. The intention of this journal is to activate a forum of exchange and intensify the discourse about the necessity for a critical shift in mainstream food growing and seed manipulation practices.

For the spring 2014 edition we received many intriguing contributions from an international call out to our curious seed story network. Among these contributions were a poem and drawing called “Radish Beets” from Whitney Richardson of Pueblo Semilla in Chicago, an article about the “Seed Diaries Project, The Art of Storytelling” from Danielle Johnson and Belle Starr in Tucson, information about the film “Open Sesame: The Story of Seeds” by Sean Kaminsky of New York, a traditional New Mexican recipe for cooking quelites from 87 year old Delvina “Vina” Armijo of Las Vegas, even the words of a contemporary seed hymn and many offerings of local wisdom from our New Mexican community. 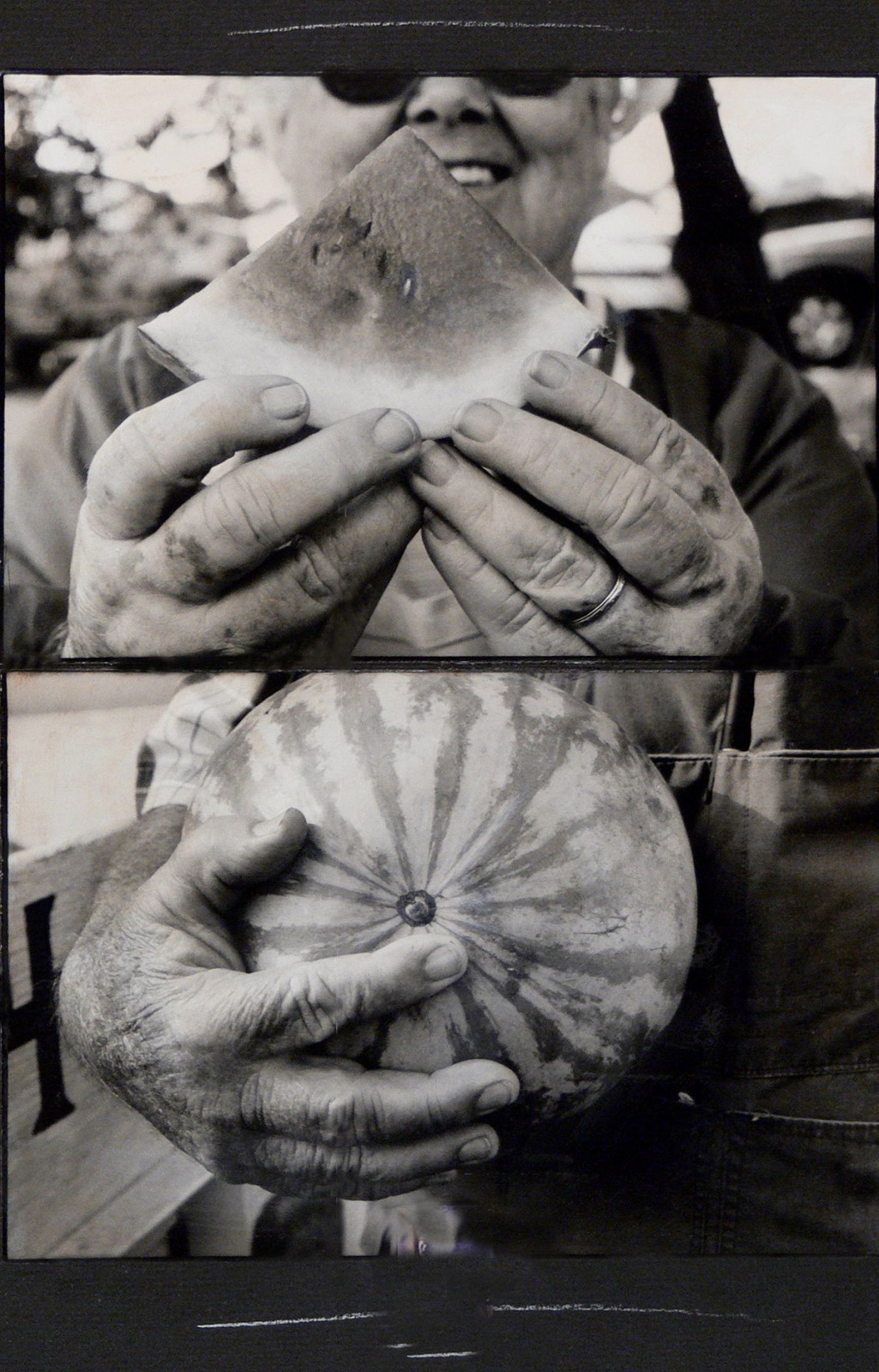 This year’s spring edition was published in March, just in time for the beginning of our busiest time of the year. The time of seed exchanges, the time of sowing and honoring our seeds for the year and so the appropriate time to spread collective seed wisdom. We printed over 4,000 copies that are distributed nationally and internationally to all of our contributors, (the furthest was to New Zealand), bundles are also placed in various local sites, such as farmers markets, local libraries, added to CSA shares and available at the Mobile Seed Story Broadcasting Station. There is a web version and agri-Culture Journal archive on our web site: http://seedbroadcast.org/SeedBroadcast/SeedBroadcast_agriCulture_Journal.html

Our autumn 2014 edition will be published at the beginning of October in time for the harvest blessings. The deadline for submissions is August 31st 2014. We encourage you to think about sending us a proposal or contribution and if you have any questions contact us at: seedbroadcast@gmail.com

You can listen to more Seed Stories at: https://soundcloud.com/seedbroadcast

“Seeds are the memory of life. They have their own stories and those stories have to be told every year so they do not get forgotten.” – Isaura Andaluz. 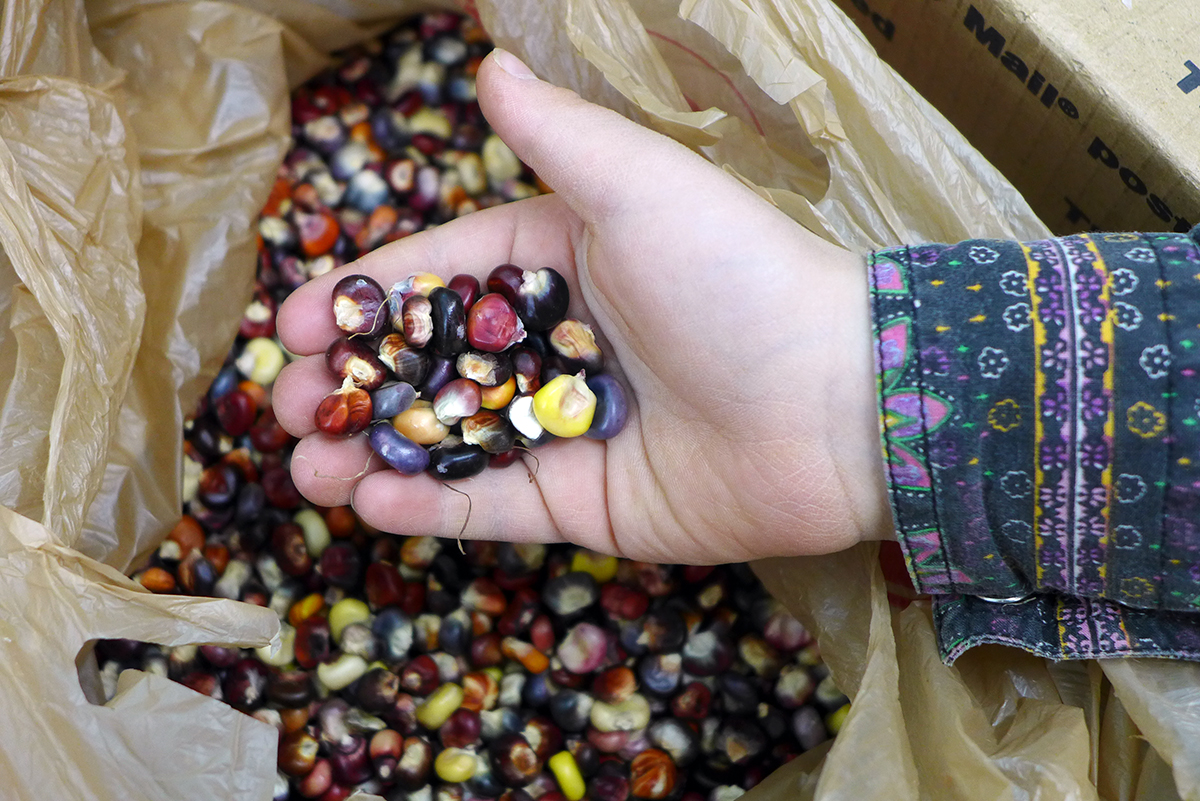 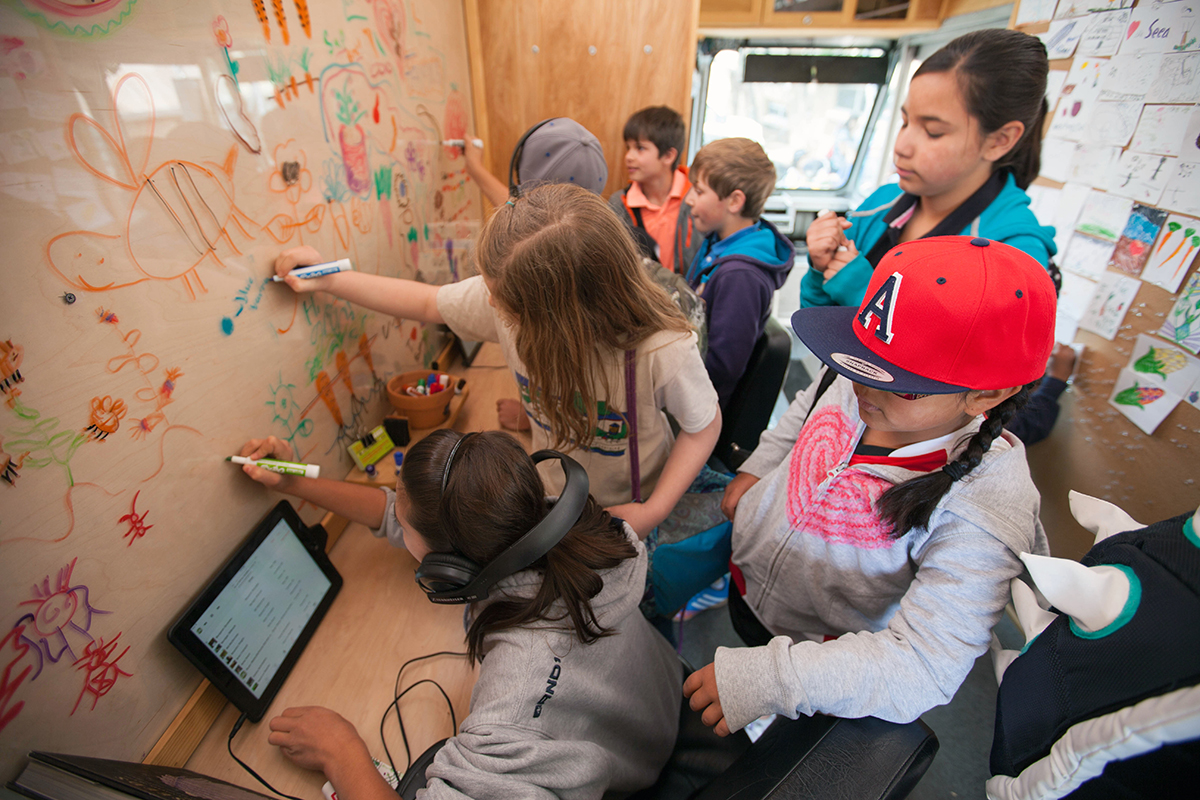