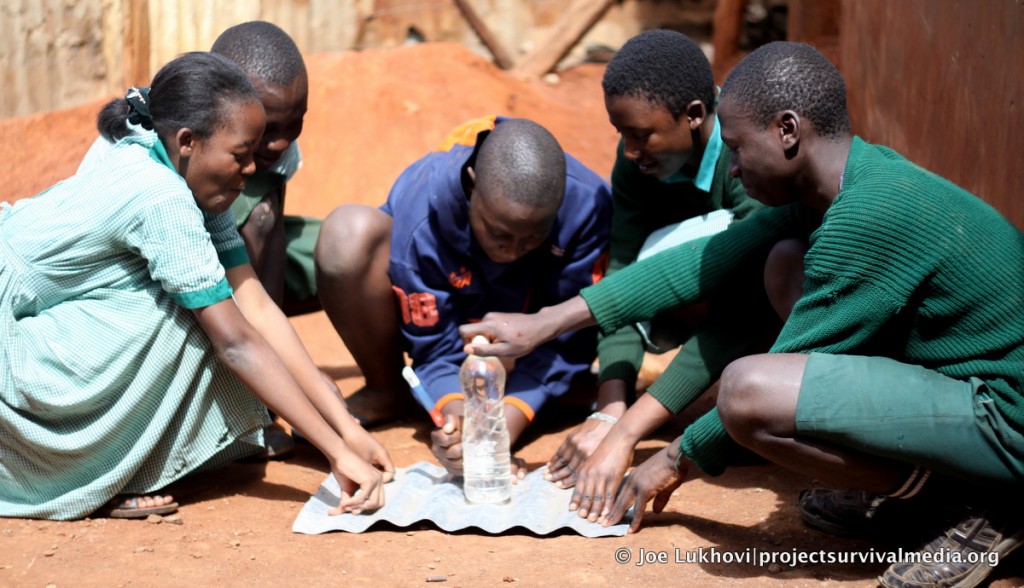 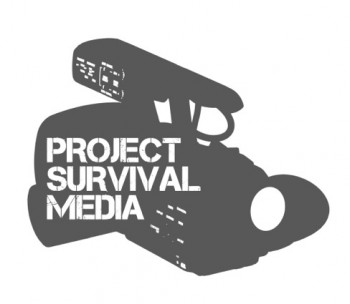 Project Survival Media
Project Survival Media is a global network of youth journalists reporting from the frontlines of the climate crisis in the…
http://www.projectsurvivalmedia.org/
Imagine this, two seven year old girls walking on a sunny day in a beautiful green valley in a tiny town in upstate New York, where they live. They’re best friends. They play together everyday and share everything. This one day, as they are walking, they are talking of scary things—there have been kidnappings just 30 minutes from their small, safe village. One girl turns to the other girl and says matter-of-factly, “But you know, you really don’t have to worry about being kidnapped because if they were to kidnap anyone, it would be me.” The other girl is confused and asks why. And the little girl answers, “Because I have blonde hair and blue eyes and everyone knows that that is what America likes.” The girl with the brown hair stared back, confused.

These little girls are a friend of mine that I grew up with and me. I was the little hurt girl confused that on a very elemental level I was being rejected for being darker – for my dark hair, my dark eyes, and my dark(er) skin color that stood out in my predominately white community.

You may wonder how these two things are tied together. I did for a long time. 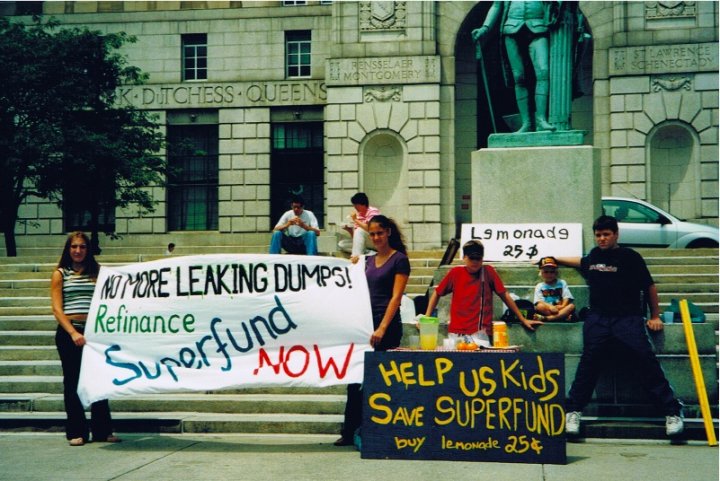 A protest/lemonade stand we hosted on the front steps of the NYS capitol building. It garnered a lot of press about the Superfund issue because we asked our governor the question, “the children of NY are raising money for Superfund, what are you doing as governor.” A year after the bill was passed.

When I began to learn at a young age how pollution worked, I began to change. I had that quintessential awakening angering moment where injustice unveils itself, becoming undeniable.

I was nine years old when my state’s Superfund Program went bankrupt, meaning hundreds of thousands of people all over NY were now more at risk of toxic exposure and severe diseases. This is how I learned that my community wasn’t unique in it’s battles with toxic waste and government bureaucracy—that there were communities all over the country and all over the world like mine that were bearing the brunt of our toxic waste, our power plants, our water treatment facilities. Those communities happened to be either poor, or communities of color, or both. And, children from those communities are growing up in a world that tells them they are expendable and that they don’t fit.

This realization joined with my own feelings of not being accepted fueled my intense desire to create communities that have room for all people to lead healthy meaningful lives.

I suppose this is the underlying ethos of all the work I do and the spirit in which I founded Project Survival Media (PSM) four years ago. PSM is a global youth media network producing photo and video documentaries on climate change issues. We focus on human stories of triumph and             tribulation, putting a face to the climate crisis, and elevating voices of those most vulnerable. 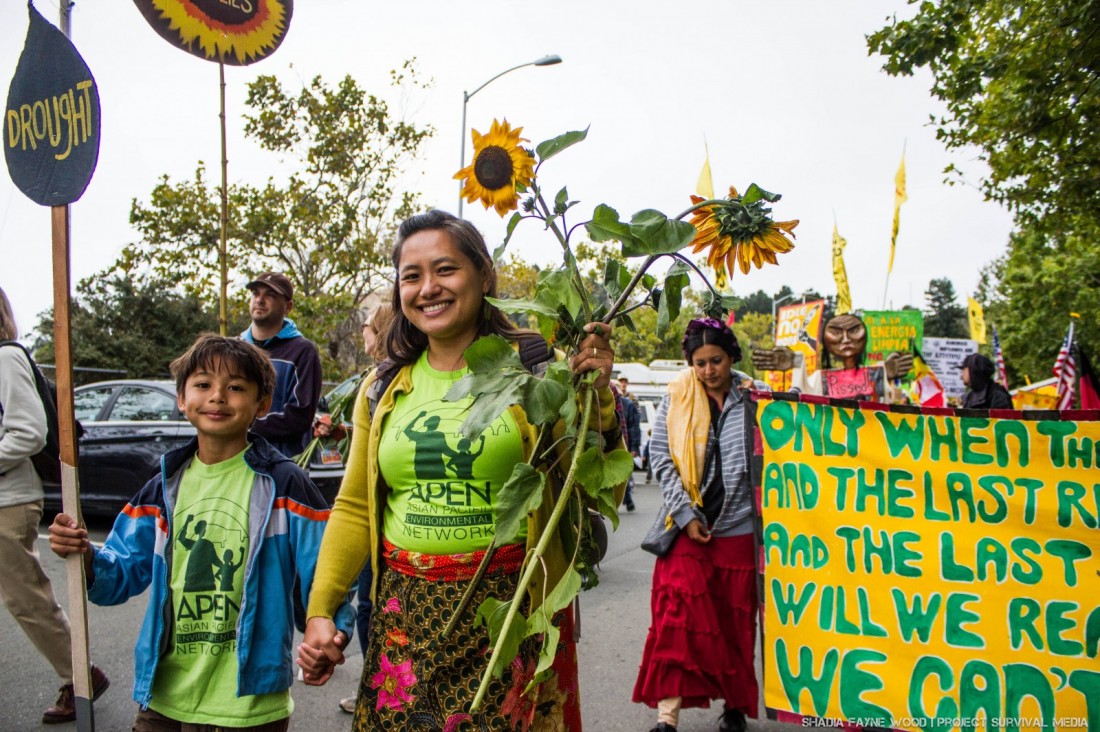 Recent protest in the Bay area around the Chevron refinery. Photo by Shadia

Climate change is scary and is scaling faster than our solutions and our movements can keep pace with. The seasons are shifting, weather is becoming more extreme, and the world we once knew is changing before our eyes. In order to safeguard our communities and turn the tide on this huge issue, we need a movement big enough, diverse enough, and powerful enough to meet the scale of this crisis. And, to build this movement, we need compelling visual media.

The role of media in successful movements is indisputable. The question we’ve been asking ourselves is, “What is the best way to tell a story and use a story to catalyzes change?”

A few years ago we designed a program called Solutions for Survival (S4S) that we think starts to answer this question. We assemble media teams in different countries led by incredible media makers from the countries they are reporting in. These teams find inspiring stories of community leaders that are implementing equitable and replicable climate solutions. Our teams produce short video and photo documentaries on these stories in an effort to more quickly spread these solutions to those that need access to it most. We then partner with media outlets and organizations that can use these stories in their campaigns.

Our thinking is, while some of our governments are wasting precious time, we’ll do our part to create communities better equipped to deal with the climate changes already underway and motivate people around the world to dedicate their lives to stopping the extraction and burning of fossil fuels.

We currently have two teams in India and Kenya and are working to expand our program to three more countries next year. With the small sources of funding received over the years we’ve been able to slowly grow this program and two others, while becoming so much clearer on how it all works together.

There is so much in the world to worry about—the financial state of our country, women’s rights to their own bodies, access to foods that aren’t filled with chemicals and GMO’s; all related to our survival as humans. And yet, there are so many powerful inspirational movements springing up around the world, where people finding a better, more humane way to live. I am so excited to do my part—to bring about a world where a child’s value is not questioned and where the water she drinks nourishes not only her body but her heart. 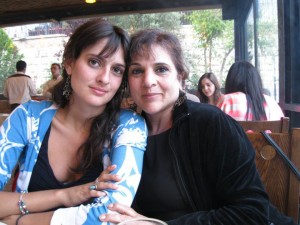 Shadia and her mother.

Shadia Fayne Wood is an Arab American from upstate NY and is the founder and Director of Project Survival Media. When she was seven years old, she became involved in a campaign to address the cancer cluster in her community that was caused by nuclear waste. Though young, she was driven to spearhead what would become a successful eight-year campaign to pass state legislation to refinance the Superfund Program in New York State. The bill passed into law in 2003 and in recognition of her efforts, she received the Yoshiyama Award and the Brower Youth Award. After graduating high school, Shadia worked for the Environmental Justice & Climate Change Initiative as the youngest Campaign Coordinator in the Energy Action Coalition. She was featured in the 2007 Green Issue of Vanity Fair and is a recipient of Elle Magazine’s 2008 Green Awards. She has managed media teams for all national summits on climate change Power Shift ‘07, ‘09, and ’11 and all major Keystone XL actions.

Find what inspires you, find what you are good at, and get involved.