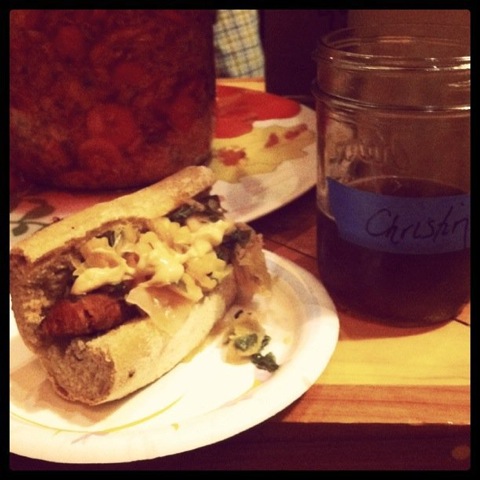 No Room for Squares: Down Home Style – Celebrating Urban Homesteading

Kindle Project friend, adviser and grantee, Tiffany Brown has started a delicious revolution in the Bay Area. Her project, No Room for Squares, started as she began to DJ smooth vinyl sets in San Francisco and then realized that her love of music, local food, and community could be combined to be a growing movement.

Her project epitomizes the kind of collaboration that most inspires us. Tiffany has a special quality about her that makes combinations like sauerkraut and records feel completely natural. The links she is able to make between people, producers, artists and community is tapping into the innate and seemingly collective desire to be more connected to food, environment and joy. It’s a particular kind of collaboration – one that requires a skillful hustle that Tiffany has been having great success with.

In her article below you’ll get a chance to read a humbling account of how this collaborative project came into being, what’s been happening with it, and where it’s headed. Her descriptions also lend themselves to a kind of how-to that make this kind of work feel possible in most any urban context.

To stay in touch with No Room for Squares be sure to ‘like’ their Facebook page here. 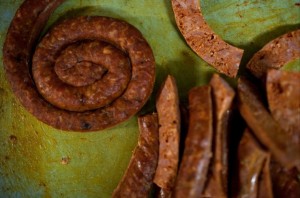 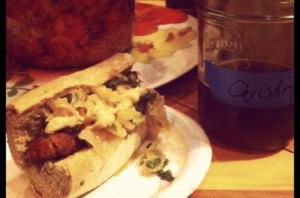 No Room for Squares: Down Home Style – Celebrating Urban Homesteading
by Tiffany Brown

I think one issue in the city is that people on their “grind” can think of local, organic, wholesome food as unattainable:  it’s expensive, no time, it’s alternative.  The second issue is that a food activist approach can be preachy or dogmatic.  In turn, I decided to focus on the joy of the food movement!  We need to bring this joy to a wider audience and in an accessible environment with live music, DJs, good company – a party. And so my friend, Vanessa Carter, and I birthed No Room For Squares – Down Home Style (celebrating URBAN homesteading).

We started around the time that I was DJing a jazz happy hour (called No Room For Squares) at a local venue – SOM Bar. I was partnering with jazz musicians for an all vinyl set of funky jazz, and they were providing the live music component.  I was meeting a lot of people in the nightlife sector.  I started to see the potential for cross-pollination, and using the nightlife to leverage more activist oriented goals.  Everyone I met I would tell that soon I would be offering a party of my own: Down Home Style.

The first party came out of a visit to the SF Underground market in January.  This market was a membership-based movement to allow for food producers without access to a commercial kitchen to bring their wares for sale.  It’s a brilliant operation that helps vendors to get their foot in the door to start their small businesses (which has recently been shut down by the SF Health Department!).  Vanessa and I chatted with many vendors.  We thought that the perfect first party could be home made sauerkraut, home made sausage and home brew beer (my younger cousin has been brewing for about a year now).  We met with chef Peter Jackson (of Canvass Underground – pop-up dinners), and he was on board for our first party.

Step one: we taught ourselves how to make sauerkraut and invited folks to join in.
Step two: we made sure that cousin was ready to offer a tasting of home brew for the party.
Step three: Peter Jackson joined us for an evening of sausage making.

Our first party had about 40 people.  There were folks from the nightlife scene (dancers, club owners, new friends), educators, organizers, family and neighbors.  We gave a brief overview of the vision and had live music and I DJed.  We offered subscriptions to the CSAs (community supported agriculture) that Vanessa and I were a part of: Marin Sun Farms which focuses on organic, grass fed meat and Mariquita for veggies.  We brought attention to Peter’s endeavors with Canvass Underground.  And we invited people to join us in future workshops where we teach ourselves how to make various seasonal items – to can, pickle, and brew beer.

The next party built on this momentum.  The intention was to cast a wider net.  It was held at a larger venue, a community business that rents out its commercial kitchen for a discounted rate to small-scale producers.  We focused on having the local producers showcase their wares: a sauerkraut producer, Peter’s andouille sausage, home made bread from Sour Flour.  Again, there was live music and a DJ.  We had home brew beer, with back-up beer from a local producer (He’Brew).  We had over 100 guests.

A few collaborations were born out of Down Home Style, and we expect many more as the project moves forward.  The sauerkraut producer is partnering with a food truck owner, who was in attendance, to use his kraut for the truck’s upscale street food.  Another guest at the party, who is also a local producer, has been developing a plan for a San Francisco-based community space and commercial kitchen and is in conversation with the venue about her products and how the business got established as a community business.  My cousin was able to meet the founder of He’Brew and learn about how to take home brewing to the next level.  And Peter Jackson and I are exploring the many ways to bring his meat and the “whole hog” approach to urban homesteading parties in the future.  (Whole hog meaning ways to utilize as much of the animal as possible so that we are not wasteful in the use of animals for our food).

A couple weeks after the party, I invited some local producers over for a dinner.  We debriefed the party and brainstormed future projects to do together.  The next day there was a panel discussion on the SF Underground market and the state of the local food movement.  We all went to this discussion together.  It felt powerful to be a small group that was a part of a larger movement of local foodies.  We connected with another group offering many skills-sharing workshops called 18 Reasons. I feel that my role is to continue to foster this sense of community and create more ways to bring people together around food.

My intention is to make a revolution around food irresistible.  We have a great time working together, eating together and playing together.  The farmers and producers are a part of our community and we all teach each other how to become more involved one step at a time.  It doesn’t have to be expensive, if you lean into your local farms, buy seasonal produce and learn to grow some of your own food.  It doesn’t have to take tons of time if you start to focus on key things you are good at producing, so it’s effortless and fun.  And then you can begin bartering for other people’s wares.  This is a stepping-stone into an alternative economy! 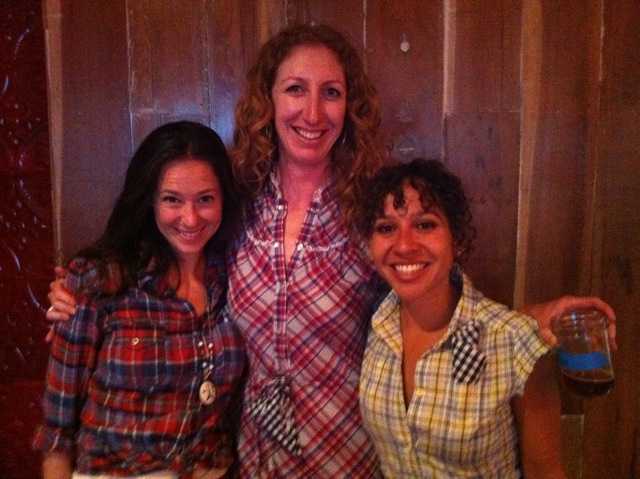 Tiffany Brown (pictured here on the right with the other No Room for Squares organizers) has spent several years in the non profit sector as a Program Manager and Co-Director of YES!.  She currently lives in San Francisco, using her event planning background to launch a production company titled No Room For Squares.  Her passion is blending music, food/urban homesteading and community building.  She is interested in collaborative leadership models for business and the exploration of alternative economies based on bartering and sharing.  Jazz lover and foodie, Tiffany is driven to find a fun, accessible way to bring values alignment into how people think about their food choices and participation in the local economy.