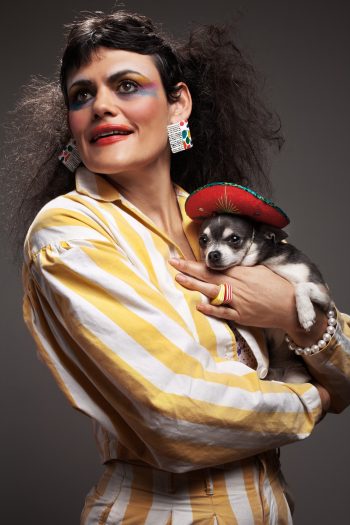 Preparing to go and have lunch with Jibz Cameron, whose alter ego Dynasty Handbag is a 2011 Kindle Project awardee, is a bit like prepping to meet the best friend you’ve always wanted to have. Not in the Julia Roberts way, but more in the way that I knew that having lunch with Jibz would feel like having lunch with an old friend – one who leaves me less with the familiar sense of nostalgia but with renewed sense of inspiration and jittery excitement I hope to get from a budding professional partnership. 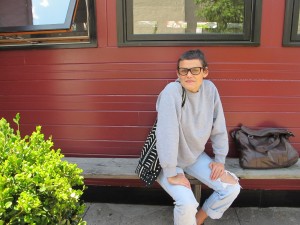 My lunch date is not your average artist. Ok, is there is even such a thing as an average artist? Perhaps it’s better to say she’s one of the most unique, comical performers we’ve ever had the chance to encounter. Her work is unabashedly bizarre and deeply funny, with hints of emotional depth that leave you ruminating in your own reflections days after you’ve experienced her work.

Jibz had me meet her at a place called DINER in Williamsburg, Brooklyn. From the outside it looked like an old barn or shed, and the inside felt like an old boat, the perfect setting for a Canadian girl like me to bask in the glamorous glow of the NY artist. The thing is, Jibz is disarming, grounded and laugh-out-loud hilarious without even a pinch of pretension. Her glamour resides in her earnestness, which makes her delightfully easy to speak with. After we shared a perfectly locavore meal in the DINER/boat we chatted outside in the New York sun about her new work, Eternal Quadrangle, what’s next for her, and the movable intricacies of her artistic process.

Eternal Quadrangle premieres at The New Museum in New York City tomorrow, May 18, 2012.

Kindle Project: Ok, tell me about your new piece. It has a great name! Eternal Quadrangle!

Jibz Cameron: Dynasty Handbag goes on a dating game show and the contestants are a disembodied brain, a stray dog, a professional golfer and the grim reaper.

KP: Are they all played by puppets?

JC: No, they’re animated creatures and I do all the voices. I ask them all questions and they use the trope of the dating game show where there are exchanges like, “Bachelor number 4: look at bachelor number 2 and tell me, if he were a kind of animal what would he be?” You know, that kind of stuff…but mostly the ideas behind it are about when I get locked into thinking there’s a certain way to think or act that’s a solution to whatever problem I’m having instead of being really open. I found that when I was going through a lot of stuff last year I kept thinking you need to deal with it in this way which would be the representation of the golfer who is all ambition and focus and success and I don’t have any of those desires [giggles]. Or like being really fatalistic–we’re all going to die anyways so who gives a shit what happens. Or the dog is self-pity, just wallowing and wallowing. And the brain is just…it’s like on speed, it’s not on speed…

KP: The brain is where speed was born?

JC: Ya, it wears running shoes. The brain [character] is more trying to figure things out – trying to attack everything, you know all [she makes many funny mumbled sounds]. The whole thing with the dating game is about the relationship with the self. It’s very weird that we lock ourselves into small ways of thinking and compartmentalizing. And on a larger scale I think compartmentalizing is really bad news for everything.

KP: Well, it disconnects you from everything you’re experiencing when you choose to only experience or view something from one of those little identities.

JC: And it’s also just sort of universally kind of fucked up. We want to identify things and label them and make sure we’re in control of what they are. And have them be tidy. I guess that’s sort of the impetus of how this one [project] came about. I can’t tell you the trajectory of where theses ideas were invented.

KP: What’s so interesting hearing you talk about it having seen other Dynasty Handbag videos is that you describe it so articulately and with so much emotion and it’s so clear. If you were describing this to me without me knowing your work I’d be like, oh yes, I’m about to experience something I can totally relate to and tap into, but the whole visual and the character of Dynasty Handbag is absurd in so many ways!

JC: Ya, it is absurd. I also just like comedy so I try and make things funny.

KP: She’s super funny. The first time I saw your videos I was completely entranced and quite uncomfortable all at the same time, which is what I love about it. And then you get to know DH a little more – less uncomfortable and you can kind of find you way in to relate to it. That was my experience of it, but I remember watching it for the first time and I couldn’t take my eyes off this thinking you have this magical courage about you to take these understandings of yourself and present them in these entirely comedic, colorful, absurd and unusual ways. That’s my experience.

KP: One of the notes I wrote this morning was that you have so much courage [she winces] You know…not in this pedestal queen of Williamsburg way, but it takes a combination of courage and grace to make comedy absurd and meaningful at the same time. It’s hard to do.

KP: What about courage?

JC: Seems a little distant. But, I guess I do work on things in my life that aren’t directly related to my art practice that I do feel takes a lot of courage and that informs what I do in my art practice. I don’t sit down and think…I’m gonna go really deep today. The stuff just comes and then I realize it’s coming because of something I need to look at. Or sometimes the story will tell itself to me after the fact; oh that’s why that guy needed to be in this thing – of course?!It also doesn’t really matter what it means to anyone else. It’s so subjective. It doesn’t really matter what I means to anyone else. But if it’s sitting with you, fine.

KP: But, you keep making stuff for people to enjoy, interact with and consume in some way.

KP: So it must mean that people are responding in some way.

JC: Ya, I feel like I get a lot of good response. But, I also feel that I care less and less about that.

KP: What does a good response look like for you?

JC: You know, people throwing money at me. People killing themselves because I can’t always respond to them as my fans.

JC: I get really high off performing and when people come up to me after saying “You’re so great, so inspiring, I laughed so hard” I love it when people tell me how hard they laughed. That’s the best. Or when people tell me they’re inspired…For me the thrill is really in the moment. I definitely feel if I can’t captivate an audience I feel very bummed out.

KP: Is this performance art?

KP: I lived in Quebec for a long time and Quebec is really obsessed with performance art, which is really funny to me cause it’s this label, this term that I never really understood.

JC: I don’t get it. When people ask me what I do I usually say I’m a performer cause that’s what I do. I also act in other people’s work. Ya, it’s performance art. One time a show I made was billed as “is this performative comedy or comedic performance?’ As a joke…It was a commentary. It is funny but I don’t think of myself as a comedian at all. I think of myself as a performer.

KP: Comedy is such a weirdly specific genre.

JC: But it’s so much like that thing of compartmentalization. Look at someone like Andy Kaufman who said he wasn’t a comedian. And he wasn’t. But, he performed not plays, but things in a theatrical setting. All the trappings of it make it really confusing for people. People ask me, ‘what kind of plays do you perform in?’ And the answer can go all over the place.

KP: Maybe, or maybe not…this interview is not about me! But it is [your piece] about longing. [With Internet dating] you’re longing to connect with someone, or fuck someone of whatever it is you’re looking for on the Internet. But you have to make yourself fit into a certain box, sometimes quite literally you have to type your shit into these fucking boxes and then try and to attract the right fly to your strip basically.

[We both said, “Eww” and laughed out loud for a few good moments.]

KP: The whole notion completely freaks me out, but there is tremendous pressure in the dating world to make yourself into one thing for one person, and another for another person. I could see myself making four different profiles based on your four different suitors. It really struck me that we’re desperate to relate in one way, but we’re not one thing. Maybe this is the evident piece of your new work but we need a combination of these four archetypes to be in one person.

JC: Now you’re writing my ending that I never got – shit…

JC: It doesn’t end neatly. Now you’ve given me a better ending!!

KP: What the ending?

I watched her brain work and ramble for a few minutes and couldn’t quite follow – but it seemed she was having an important revelation. Thank you Ok Cupid. We finished chatting in the sun and I left the conversation wishing I would be in New York to see the premiere of Eternal Quadrangle and to witness Dynasty Handbag in action would be only further confirmation of her uniqueness. It’s a small triumph for Kindle Project to know Jibz and to have the opportunity to collaborate with her. In a world full of absurdity, we can all use more creativity like Jibz’s to get us through.

Be sure to look out for Jibz’s performance in Stratford, England as Cassandra in the Wooster Group’s production of Torilus and Cressida.