Transforming conflict, when it’s in your face, often violent and without reprieve, can seem impossible. Few have the sustained energy that the United Roots crew does when facing such challenges in their community. With careful determination, commitment, foresight, and passion, United Roots has been responding to violence, conflict, and the needs of the youth in Oakland for several years.

United Roots Co-Founder and Co-Executive Director, Galen Peterson writes candidly about the rewards and difficulties in his work. We had the chance to visit with Galen at the United Roots space in Oakland, CA this past April. The impression he left on us was tremendous.

Here you’ll read about their work and also get a sense of United Roots from this slick video by Storytellers for Good.

Have you ever tried to fall asleep at night while listening to the sound of machine gunfire coming from the street in front of your house? Have you ever walked out your front door only to barely avoid getting shot as your neighbor falls to the ground, bleeding to death?

I have been living and working in Oakland for almost a decade now and these things happen almost everyday. They are common inner-city occurrences, especially in communities with high unemployment rates. With over 10 years experience in social and environmental justice change work throughout the West Coast (from Seattle to Los Angeles), intense struggles like these are not new to me, but Oakland became my home because the Bay Area is where my family is from and of all the places I had worked there seemed to be the greatest potential for change. 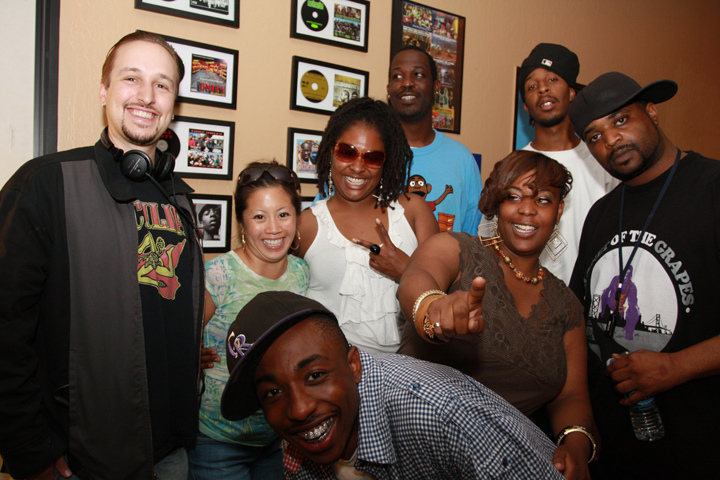 When I met Simmy Makhijani (fellow Co-founder and Co-Executive Director of United Roots), there was an urgency to take our work to the next level. Together, we worked hard to think about how issues seriously impacting Oakland could be addressed differently, not just in the immediate, but also in the long-term. United Roots was founded by us and a coalition of youth arts organizations doing social and environmental justice work in the Bay Area, including but not limited to Art in Action, Colored Ink, Community Rejuvenation Project and Grind for the Green. The purpose for founding this new community center was to create a shared space, like a hub, for organizations, community campaigns and local businesses to offer direct-services to youth and young adults in Oakland. We specifically reach out to youth from the streets and other disenfranchised youth from street culture and give them the chance to explore healing practices, artistic development, alternative educational pathways, career opportunities, and eco-sustainability. We do this by offering classes and programs in media and performing arts so that youth build skills while also sharing their personal experiences in artistic ways. But our real goal, once we have the resources, is to incubate youth businesses and offer a full curriculum in professional development training for workforce entry.

In order to directly address violence in Oakland, myself and other community members work alongside youth, hip-hop artists and turf leaders that are down to make change. The movement has actually been less about creating mainstream ideas of peace and more about building unity to work towards real solutions, which is where real peace might have a chance.  However, even with strong relationships coming together, our work has hardly been a success story. We’re dealing with a societal system that is plagued by hundreds of years of institutional violence and oppression. Further, all of our projects have seriously struggled with funding since the 2008 economic recession, making our ability to serve youth effectively even harder than it already was. Oakland, as a result, has been struggling on so many different levels since then, from riots associated with the police killing of a young unarmed man to mass layoffs and housing foreclosures. Many of the youth I was working with in 2008 who were doing relatively well ended up back on the streets at the same time a lot of community service organizations closed down. It was a harsh and disheartening experience to watch my little brothers and sisters get caught up again and because of the lack of resources and opportunities I was not able to provide these youth with the things they needed to continue on their path to success.

Opening United Roots was a necessary next step. We needed to create a safe space we could lead from the ground up with all of our allies and friends working together. Even after launching, United Roots would still take time before it was fully running, so again we had to go through another challenging period where the youth we worked continued to get caught up in the streets.  However, there was a team of youth I mentored that really stepped up to help build the Center, like Jhamel Robinson and Olondis Walker. Since opening, I watched Jhamel start his own graphic design company and Olondis create his own music distribution and music video production company. They are becoming role models for the new youth that come to United Roots who feel inspired to start their own local business ventures as a result. Our aspiration at United Roots is to support these youth in socially innovative ways so that ultimately not only do they start social ventures that provide employment, education, and enterprise locally, but they also reinvest resources back into the communities that need them most so that the longer term change we are invested in has some hope in being realized. For more info or to get involved: www.unitedrootsoakland.org