AIRE in The Taos News


By Ariana Kramer
Originally published in the ToasNews.com site on Sunday, August 14, 2011 6:09 AM MDT

The acequia irrigating their fields dried up midsummer, and half the crops were eaten by prairie dogs.

It was a challenging first year for the eight young farmers attending Chrysalis Alternative High School who piloted the school’s agricultural project.

The project is a collaboration between Chrysalis and Agricultural Implementation, Research and Education (AIRE), a new local nonprofit. 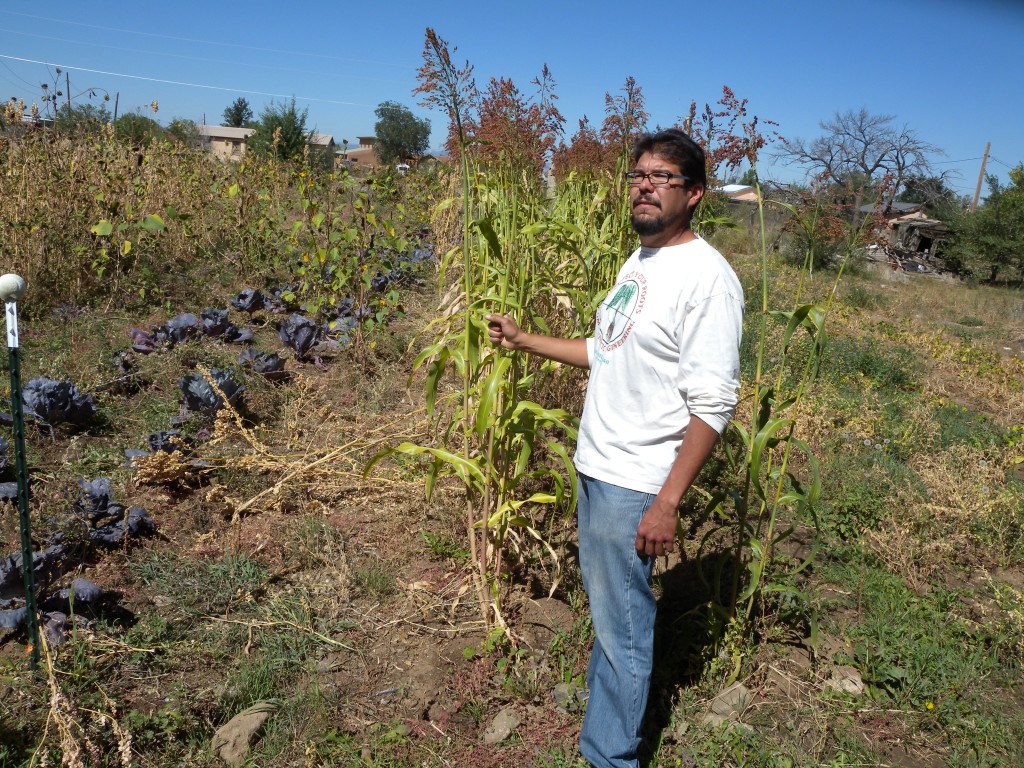 AIRE’s founder and director, Miguel Santistevan, is known for creating the successful Sembrando Semillas Acequia Youth in Agriculture Mentorship project, and as the host and producer of the radio show “¡Que Vivan Las Acequias!” in collaboration with the New Mexico Acequia Association and Cultural Energy.

Santistevan is currently a Ph.D. candidate in biology with the Sustainability Studies program at the University of New Mexico. Santistevan approached Orion Cervio, one of two co-head teachers at Chrysalis, about collaborating with the school on an agricultural project, and Cervio enthusiastically agreed.

The project fits into the Chrysalis curriculum as a biodiversity, agriculture, and permaculture unit in the life sciences class, with all Chrysalis staff contributing to the project.

“We work to integrate elements of the unit into all core subject areas and classrooms,” said Cervio, who hopes to see the program expand in future years. “As it becomes more familiar and the rewards of involvement become better known by the student body, we anticipate the program being conducted schoolwide. We think that creating a learning environment in which students can eat food they grow and prepare themselves will be a huge evolutionary step for the Chrysalis Alternative School.”

In the spring, Santistevan provided a series of schoolwide presentations at Chrysalis on traditional farming practices, crop diversity, seed identification and preservation, biology of seeds and contemporary politics of agriculture.

For his second presentation, Santistevan brought in a collection of seeds from the orginal crops grown by the Pueblo peoples and acequia communities of the Upper Río Grande bioregion. These staple crops have sustained generations of families. Santistevan played a game with the students to see who could identify the seeds.

“That’s when I knew which kids I had hooked, cause as we were playing the game I was just watching the kids and how they responded to the seeds,” he said.

Eight students emerged who wanted to deepen their involvement with the project. Joseph García was one of them. García followed Santistevan from the school building and into the parking lot after the seed presentation.

“This kid followed me out to my car. ‘Hey mister,’ he said. ‘I gotta tell you, I’m feeling everything you said. I want to be a farmer.’ ”

García was one of three of the eight students who committed to work on the project through the summer. He reflected on what sparked his interest. “Frankly, at first, I didn’t really get into it. But, when he came in with the seeds.

He comes in with these seeds and he just told this whole theory — how this world is coming to [a place] where they don’t even do irrigation like they used to. It kind of hit me — that the natural way of growing seeds is the way.”

García was particularly struck by the genetic and historical significance of the crops they planted — crops like lentejas (lentils) and corn that have co-evolved with the people and microclimates of the Upper Río Grande bioregion for hundreds and thousands of years.

Santistevan has been collecting these seeds from traditional farmers for a seed library for years. He parcels them out to committed farmers who grow them in different microclimates to maintain their genetic resiliency.

“He [Santistevan] was telling us that the seed he has is from generations and generations of passing it down in his family. He told us they’re the best seeds to grow in Taos, because they’re already used to the human environment and desert,” García recollected.

Planting crops In April, Santistevan took the whole class out to the field leased for the project. The students spread seven yards of manure and made rows using hand tools. They planted garlic, peas and other early season crops.

Later, a group from Vista Grande High School came out and planted another section of the field as part of an Expeditionary Learning experience. Soon the fields filled with squash, corn, lentils, potatoes, garbanzos, wheat, oats and buckwheat. Students came out once a week to irrigate using acequia water. In mid-June the acequia went dry.

This provided an interesting twist on an experiment conducted on comparative crop dynamics. Oregon strains of peas were planted next to Taos peas to see what kind of difference in crop production could be seen between locally-adapted crops and their Northwestern counterparts. One Chrysalis student, Chris Duran, is developing a science fair project based on the experiments. Santistevan said they will conduct scientific analysis, but it’s obvious which seeds came from Oregon.

“You can tell because the Oregon guys are just suffering beyond belief, and the Taos guys all produced.”

This drives home the point that the staple crops traditionally grown here are adapted to drought conditions. Santistevan has a way to determine how much of their resiliency is genetically encoded in the seed. Another research project he envisions is comparing this year’s crops with their parental and grandparental strains (which did not experience the 2011 drought) to see what degree of resiliency is encoded in the genes due to the genetic bottleneck of this year’s drought.

The real crops that the Chrysalis students grew are seeds that survived the bottleneck. They mimicked what farmers have always known. If you grow, save, and replant seeds, the trials of each generation strengthen the seed — and the farmers.

“When it comes to what is the most sophisticated, welladapted, resilient agricultural system, in North America, it’s under your feet,” asserts Santistevan. “It’s right here — Upper Río Grande region. Because we make good use of our water, we have models for sharing water, we make good use of our land and our crops, and we have all these mechanisms to adjust and adapt.”

Santistevan continued, “By and large, the rest of the world simply does not have that. They have no idea. They’re trying to genetically engineer a drought-tolerant corn. Come on! Corn’s already drought tolerant. You can’t improve upon perfection. What they gotta realize is they gotta stop putting so much water on it, so much fertilizer on it, so much herbicide on it, so much pesticide on it, and let it be what it is. And there’s plenty for everybody. And we’re the ones that know that, you know. We have that embedded in the seed. It’s in the seed. It’s in the memory of the seed. We have the seed, and we have the memory of the seed, and then we have the memory of how to do it, cause we continue it. And that’s what’s happening here.”

To illustrate his point, Santistevan gestures to his cornfield where bright green leaves wave cheerfully in the breezes. It’s the hottest part of the year, the rains haven’t started, and the plants haven’t been watered for six weeks. Only three plants are complaining. Not so, the Chrysalis students.

Despite the fact that most of their crops ended up as prairie dog food, they are not discouraged. They have handfuls of seeds, and their school has a handful of student farmers. AIRE’s work is supported by the Kindle Project and their umbrella organization the Center of Southwest Culture, as well as research funding from Tobias Duran at the Center for Regional Studies at UNM.

Santistevan and his wife, Margarita García, maintain a small experimental seedsaving and demonstration farm in Taos called Sol Feliz and are available for group tours, demonstrations and presentations on traditional farming and foods.

They are especially interested in working with local day-care centers and youth groups.