The Original Pinettes Brass Band “World’s Only All Female Brass Band” can be seen at many different venues, such as: The New Orleans Jazz and Heritage Festival, The Essence Festival, and The French Quarter Festival, just to name a few. The ladies also have a long resume around the town for doing parties, weddings, conventions, school events, nursing homes, etc. You can also catch us every Friday night at Bullet’s Sports Bar, a local, neighborhood bar in New Orleans, LA. The band have traveled internationally. We have toured the cities of Turkey and Europe to perform festivals.  We also performed on the series Treme, seasons 3 and 4.  The band has very much in common with the other male brass bands around the city, the only difference is the Original Pinettes are all females. The ladies gained more respect when they earned their crown and became the winners of the 2013 Red Bull “Street Kings” Brass Band Blowout competition where they beat three other male brass bands changing the name to Red Bull “Street QUEENS!” Today, the band is still on a journey of becoming the best in the industry and to take over this male dominated industry. The Original Pinettes Brass Band’s dream is to travel worldwide and show everyone that music is definitely a universal language. 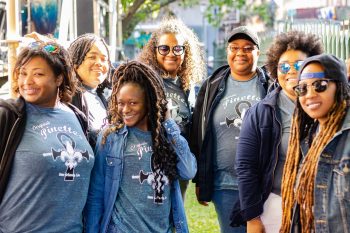