Nanbel is a dark comedy series of sketches set in the fictitious town of Nanbel – Lebnan (Lebanon) spelt backwards. In Nanbel, anything can happen – just like in the real world – and therefore the absurd and the unusual are both real and common. The victimizer is given endearing and identifiable qualities to highlight the crime or misdemeanor itself. Nanbel tries to provoke uneasy laughter or feeling and a sense of responsibility in the viewers as individuals or as a society. It does that by detaching the viewers from the victim’s suffering, until they identify with the “crime” – perhaps one that they may have already but unknowingly committed. The acting and setting are mostly realistic, but reality itself is absurd and more obscene than fiction, more grotesque than Nanbel. 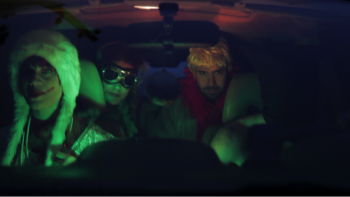