Mateo Kingman, 25, is a singer-songwriter of Ecuadorian Amazonian music that fuses traditional Latin American sounds with hip-hop, rock, and pop. Respira, his debut album, is an energy overload that sings of biodiversity, sketching natural landscapes of magic and water colors. It is infused with sounds guiding the listener from the jungle and to high mountains, between the tangle of trees and the meandering sound of the wind on the moors. Kingman’s childhood was spent in Macas, a small town in the Amazon, where he was exposed to the cultural richness of the Shuar community and Amazonian mythologies. There his feet grew calloused on mountain grass, there he dove in the Amazonian rivers searching for ancient sounds of water devils. In this environment, Kingman began experimenting with the guitar, drums, and traditional instruments. He began exploring the universal nature of music, which ties the finite and small human condition, full of passions hard to understand, with the cosmic, the chaotic, and the infinite. 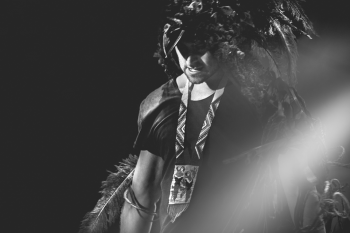