Mariel Nanasi is the Executive Director and President of New Energy Economy. A civil rights and criminal defense attorney, she is licensed to practice in both the state and federal courts. Legal cases she has won and settled have been featured in major media, including the New York Times, Chicago Tribune, Albuquerque Journal, Santa Fe New Mexican, and on many television stations, including a documentary, “End of the Nightstick” on PBS. When Mariel realized the urgency of climate change, she came to work for New Energy Economy as the senior policy advisor. Two years later, she was asked to serve as Executive Director. A zealous organizer, Mariel’s can-do spirit is infectious. As comfortable with complex policy and legal challenges as on-the-ground organizing, she easily connects with the public, including young Hispanic artists, firefighters on the front lines, acequia caretakers, grassroots Native leaders, funders, and legislators. Mariel lectures on climate change and environmental justice at conferences and college classrooms and her essay, A Future Without Coal: In New Mexico Supreme Court, Again, can be read at http://climatestorytellers.org/. Mariel is also a member of the Board of Trustees of the Santa Fe Art Institute. 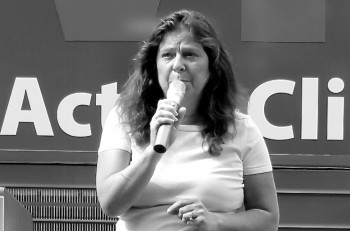