Many Mouths One Stomach

MMOS (Many Mouths One Stomach) began in 1996 as a small group of artists and activists working across mediums to enact ritual and theatre in the forgotten public spaces of Tucson, AZ. We have grown and evolved through the challenges of the work and are about to produce the 33rd Annual All Souls Procession attended by hundreds of thousands who gather to Honor the Dead and Celebrate Life on the second weekend of every November. MMOS produces community events, festivals, and showcases all year long at MSA Annex, an all-ages, open-air venue on Tucson’s Westside. MMOS hosts free support groups, workshops and meeting space at an artists collective called The Hive on Tucson’s Eastside, in partnership with Homicide Survivors Inc. MMOS also serves as a fiscal sponsor to smaller arts groups seeking grants and funding for their projects. 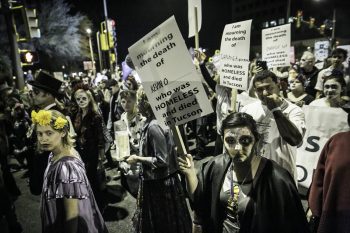