Julio Salgado is a visual artist based in Berkeley, CA. Salgado was born in Ensenada, Mexico and moved to Long Beach, CA with his parents and younger sister in 1995. His status as an undocumented and queer immigrant and the bravery of civil disobedience actions by undocumented youth has fueled the content of his activist artwork. Salgado co-founded the multi-media project DreamersAdrift.com after graduating from California State University, Long Beach with a degree in journalism. In 2012, Salgado appeared on the cover of Time Magazine along with journalist Jose Antonio Vargas and other undocumented activists. 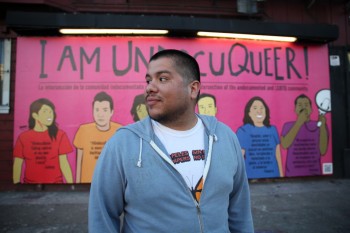