Dread Scott makes revolutionary art to propel history forward. He first received national attention in 1989 when his art became the center of controversy over its use of the American flag while he was a student at the School of the Art Institute of Chicago, where he received a B.F.A. This work was denounced by President G.H.W. Bush and outlawed by Congress. His art has been exhibited at the Whitney Museum of American Art, MoMA PS1, the Contemporary Art Museum Houston, and at the Pori Art Museum in Finland. In 2012, BAM (Brooklyn Academy of Music) presented his performance “Dread Scott: Decision.” He is a recipient of a Creative Capital Foundation grant and Fellowships from the New York Foundation for the Arts. His work is in the collection of the Whitney Museum and the Arkon Art Museum. He works in a range of media including installation, photography, video and performance. 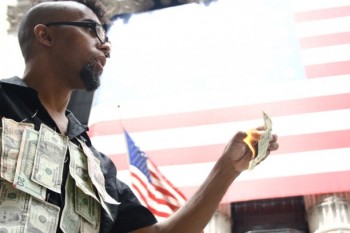