Blu is a street artist from Bologna, Italy whose works cover walls worldwide. His giant cartoon style images, ranging from twisted to surreal, explore the absurdity of the human form and human nature. He expresses that his images say more than he can with words, and though he is not a self-proclaimed activist, he exudes a strong political voice in his work. Originally working in aerosol, but now using mostly black and white water based paints, rollers and brushes, this purposeful limitation accentuates the affect of line and form and emphasizes the drawings themselves.  Using these mediums to make epic images in public spaces, he incorporates stop motion cinematography to create morphing animations from the farthest stretches of the imagination. Though his identity remains anonymous and many of his works take shape on humble urban streets, he has accepted large commissions such as painting an exterior wall of the Tate Modern in London as part of a collaboration with 5 other international street artists. 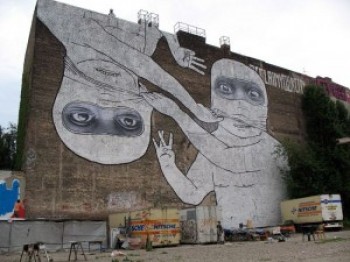