Growing up in a war, where the bombs were 12,377 kilometers or 7,691 miles (or 6,683 nautical miles though Afghanistan is land-locked so perhaps not as relevant) away. An Afghan-American suburban dream punctuated by weekend sleepovers, Saturday soccer games, fist-fights with racist children of the Confederate South, and religio-nationalist driven demonstrations chanting “Down with Brezhnev!
“Long live Islam!”
“Down with Communism!”, and “Long Live Afghanistan!” before I even knew what that meant. It is what I was fed growing up, in between southern-fried chicken and garlic mashed potatoes, cumin-scented meat and basmati rice…

He started creating visual works at age 21. He has exhibited his work in galleries, independent spaces, and cultural centers in Los Angeles, California, Paris, France, and Kabul, Afghanistan.

In his work, Aman often uses contemporary, post-modern ideas of conflict and globalization combined with traditional narratives rooted in culture, belonging, and self-identity. His work focuses on the human experience as understood through interactions and confrontations, both internal and external, with personal, social, political, and cultural conflict. Through and across the different works, one can find threads of cultural tradition (be they real, imagined, invented), identity, politics, diasporas, humanitarianism, war, and reconstruction weaving reflections, often contradictory, of humanity; a humanity which finds itself in a post-modern world that is simultaneously globalizing and fracturing, forcing us to confront each other and ourselves in ways we have yet to learn or understand. While continuing his own work in his atelier, Aman works towards the development of contemporary art within the conflict, culture that surrounds him. Aman lives, works, and creates in Kabul, Afghanistan. 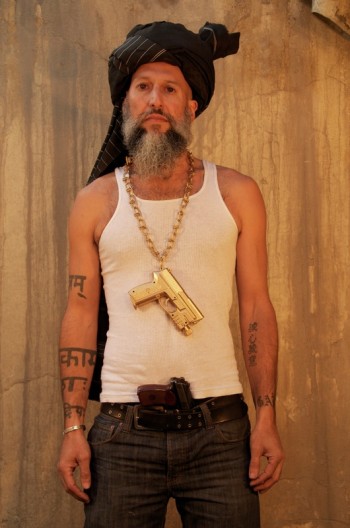