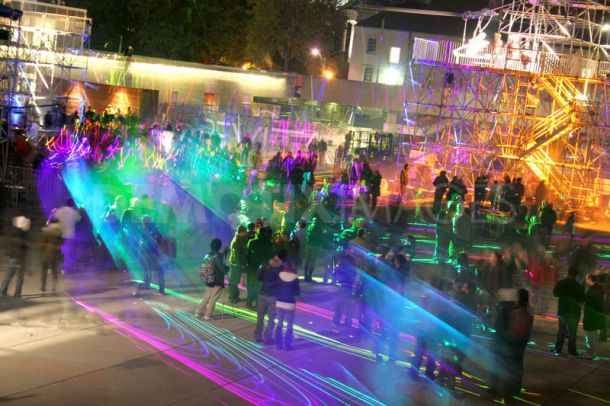 How can a public spectacle help to shape our ideas of how we interact with nature, space and cities? Can it really offer a tangible route for creative alternatives to transportation, civic engagement and an investment in how we live with a less harmful impact on the natural world? These questions have been on my mind for years, and in the context of Kindle Project, it has recently become relevant. As we set out to explore the most current incarnations of unique collaborative efforts on the blog these past two months, we came across one such effort that got our attention. Flightpath Toronto took place on October 1 as a part of Toronto’s Nuit Blanche, where for one sleepless night the city was transformed by hundreds of artists for the sixth annual sunset-to-sunrise celebration of contemporary art.

Flightpath Toronto was the main event of this year’s Nuit Blanche. “A mass-participation spectacle inviting citizens to rediscover the possibilities and wonder of urban flight, with interactive lasers & hundreds of flying members of the public.” (Source: Usman’s Haque’s site). 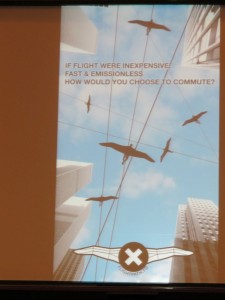 A slide from the press night for Flightpath. This image was also displayed during the spectacle itself.

According to Usman Haque and Natalie Jeremijenko, the artists behind Flightpath, the purpose of this piece had a few layers. There was the obvious wonder, whimsy, and playfulness of having the opportunity to strap on giant wings and zip across city hall while voice-activated lasers danced around the entire square. In addition, the purposeful creation of a collective memory had its place within Flightpath. There were also the conceptual, deeper layers of this spectacle’s purpose. At the press night for Flightpath, both artists spoke humbly and passionately about the installation’s vision – to reimagine our relationships to natural systems.

Jeremijenko believes that reimagining our relationships with natural systems is the biggest concern of our century.  “Air is the medium we pollute the most…now is a good time to start thinking about how we (can) reimagine air space.” Haque’s inspiration for the piece, stemming from watching birds occupy and fly around the city square in 2010, led him to invite Jeremijenko into this collaboration. The two of them share a fascination with flight and Jeremijenko’s previous work has already begun to explore this notion. The relationships that humans have to birds and flight can, according to these artists, affect how we imagine city transit. By reclaiming the wonder of flight, she seems convinced that health will improve due to better air quality from the lesser dependency on oil fueled transit. 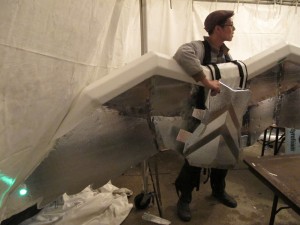 I had the opportunity to get a little behind the scenes action for Flightpath Toronto. This very expensive city commissioned and funded installation took over the central square outside of city hall and took a year of dreaming, international planning, lobbying, rendering, drafting, designing and constructing across three countries. Kindle friend, Casey Wong, was one of the design geniuses. Fabricator and site worker he helped bring this bizarre spectacle into fruition. Seeing Casey render various incarnations of wings both big and small, while trying to be in touch with artists in other countries was a mini-spectacle in itself. I often wondered if this massive collaborative undertaking would even get completed. It did, and in Casey’s opinion, part of the success of the project is that it came into being at all. Similarly, Haque described it as being “the most complicated project he’s ever worked on.”

Speaking with Casey the night before Nuit Blanche as he tinkered with wings, glue, lights, and foil we talked about the possible effects of this installation on the city. Casey, like Jeremijenko, really felt that by bringing play, flight and joy into the city square, participants would have the opportunity to imagine what various modes of transport could look like in our cities. Imaginative as I am, I wondered as well.  But what about the other thousands of people who passed through the square that night? Would they get the same ideas? Jeremijenko’s past works have often had to do with flight and the ideas around our human fascination with it. At the press night for Flightpath she spoke with such conviction that zip lines were a very real and possible avenue for urban transit. As I stood at the impressive installation, enthralled by graceful and slow moving humans flying above me, I had to wonder, if I hadn’t heard the artists speak to the conceptual backgrounds would I have been as intrigued?

Collaborations like these are striking and in my highest aspiration whimsy would bring about creative social change…but after this weekend I am left with more questions than answers. How can artists like these make their imaginations of cities real to the public? Can public spectacles encourage lasting imagination in city-dwellers? Once we imagine new ways of interacting how do we implement these ideas? At the crossroads of arts, science, spectacle and imagination is experiencing a whimsical evening enough to keep us engaged? I suppose Fligthpath did its job… almost a week later and my mind is still reeling in confusion and wonderment.