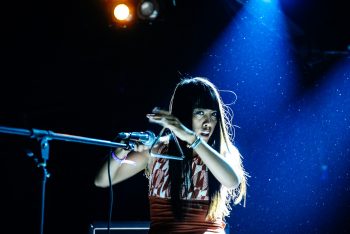 When we ask our Makers Muse Recipients to contribute to our blog, we never know what we’re going to get; it’s always an exciting moment to have that first read, that unusual introduction into what each artist is compelled to share with our Kindle community. In the case of Nova Ruth, we get a distinct insight into the roots of her name and how her name has helped to form her into the incredible artist she is today.

Nova, like many of this year’s recipients, is a true collaborator. She has been working intensively with Filastine, (whom Kindle also supported in 2009) and their combined efforts have resulted in brilliant new music. In addition to being an outstanding vocalist, Nova is also a Hip Hop artist, a community builder, and an activist and advocate in her home country of Indonesia. She has recently started a community coffee shop called Legipait in Malang. It’s the first of its kind in the region and acts as a community hub for local artists.

Nova is a multifaceted woman. As artist, activist, and entrepreneur, she is helping to put the roots, rhythms, and culture of Indonesia on the map. Below, we get a rare glimpse into her personal history.

Keep watching out for Nova Ruth. Who knows what project she’ll engage with next.

Nova explains the video posted below:

This video is one of global messages about the collapsing colony. Scenes:
• 1.5 hours from my hometown there’s a mud disaster going on. Bakrie is often mentioned as the person who started the Lapindo project. But now he’s trying to get elected as president in 2014.
• Big sections of the river in Muntilan are getting wider because of the Merapi volcanic eruption. The myth says, if humans make the river narrower (and build something on it), one day the river will take it back.
• Jakarta, so called megalopolis, the most crowded city in Indonesia, produces mountains of garbage in Bantar Gebang.

Many people think this video is about Indonesia, but what we wanted to actually say is: this is a very small example of what is happening globally.

On my name
by Nova Ruth

Many people asked is Nova my real name? I would love to tell you a little story about it.

I was born of two of the strongest people on earth.

My mother, Fatma Yoenia Ningsih, was the black sheep of her military family. She was a hiker and conquered the mountains around our city, Malang, including the highest mountain in Java. She said I sang beautifully and always pushed me to get on stage when I was a child, but I wouldn’t be so brave then. She wanted to name me after her best friend, Nova, who lost her life because of dengue and was a great piano player.

My father, Toto Tewel, is still a guitar legend in Indonesia. We met each other at least once a year throughout my youth. I barely knew him when I decided to move in with him in 2007, just because I wanted to know his personality. He has a band called Elpamas. They were big in the 80’s. Their lyrics talked about social problems back then and the over-power of the big people, the myths of our nation, even about the philosophy of tattoo. He joined a group named Kantata Taqwa/Samsara and SWAMI that was well known as a radical rock band that was influential in Indonesia’s revolutionary process back on 1998. I was invited to see his performances many times. Under my consciousness, those lyrics appear in my brain all the time, and affect what I have done even recently. He wanted to name me Setyaningtyas, meaning “the faithful in the deepest heart”.

My father’s father was a priest. He built a church in the middle of a Chinese cemetery. His church was burned down by some fundamentalist tribe. Sometimes he was threatened and they put a sickle around his neck to fear him. Pastor Moestopo. He was the one who taught me to sing when I was five years old. He recorded my voice and told me which parts were wrong, or false notes. He wanted to name me Ruth, one of the characters in the Bible that has faithful characteristics, loyal to her missing husband in the war, even staying with her mother-in-law to take care of her.

One day the elders told me that a name is a wish. Those people who loved me had a good wish when they named me. In Java, most people don’t carry a last name. This is the symbol of freedom. Today, I’m still free to decide how I carry these bravest of genes into my activism and music work. When I step on stage to work and meet with other brave people, faithful in what they are doing also free thinking and open minded, I feel that I am carrying my lineage forward. For example, in my recent collaboration with Filastine, the inspiration did not come far from where I grew up, but I wanted to deliver it as far as could.

And the next video is a cover song of Gendjer-gendjer, a traditional song that was banned by the Soeharto regime because it was used by Indonesian Communist Party to march. The lyrics are no crime.  They tell a story about a plant that grew without anyone planting it, but people can also eat it. Soeharto covered the fact that 500,000 communists (real and suspected) were killed (by the army) for making a film about the killing of 7 army generals by communist (and screened it on national television every year until 1998). This is also a local story that is global. Every country has their own stigma and has covered it, never learning from their mistakes. No country is the best country. The truth is, no country is ever honest. Each individual should learn how to be honest and participate in the process of revealing the truth.