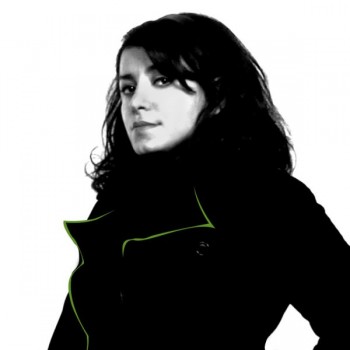 Marjane Satrapi
Marjane Satrapi was born in Iran. Having studied at the French lycée in Teheran, she furthered her studies in Vienna before…

Recently, I was talking with a friend about Kindle’s 2012 Makers Muse Recipients. This friend happens to be Iranian, and when we came to Marjane Satrapi’s name, she got a little gleeful. Her husband had never heard of Satrapi, and my friend proceeded to explain why she loved Satrapi’s work so much, adding in, “And it’s not just because she’s Iranian that she’s so great, she’s an incredible artist and writer!” I couldn’t have said it better myself.

Sometimes, in the art world, an artist gets extra recognition and accolades based on their place of origin. It is as if there is a need to fill a certain diversity quota in terms of what art we find meaning in. While Marjane is from Iran, and we do admit to being attracted to supporting women of color from often-misrepresented countries, in the case of Marjane Satrapi we were drawn to her based on a true love of her work. It is her whole person, her writings, her films, and her style that made us choose her as a Makers Muse Recipient.

Marjane gives her audiences permission to talk about identity, sex, government, sense of place, and love. Her works are as much enchanting as they are brazen. Somehow, she makes magic cool and romance mysterious again. Michael Cavna captured her essence perfectly in a forthright interview in The Washington Post, “Everything Marjane Satrapi touches, no matter how dark, feels laced with joy”. Dark yet vulnerable, joyful yet filled with sorrow; this is her work. Like invented memories of mystics poets with high heels and cigarettes, Marjane is trailblazing a place for women in a variety of genres.

All of us on the Kindle team read Persepolis when it came out just over ten years ago. It was a kind of revelation and even a revolution that so many of us could relate to her stories of growing up during and after the Islamic Revolution in Iran. Better yet, it was comic novel written by a woman about womanhood! We’d never seen anything like it before and have been fervent fans of work ever since. From Persepolis II to Embroideries, we read her works voraciously, and then sat in waiting as her films began their releases.

Her sense of aesthetic playfulness combined with her very contemporary and female voice is one of the contradicting combinations we adore about her. Her work is not only deeply revered (Persepolis was nominated for an Oscar in 2008), but widely admired and has enjoyed international success. In the clip below, Marjane speaks to the universality of her work when discussing her most recent film, Chicken With Plums.

Marjane’s ability to build bridges without kitsch or tricks and to create work without apology or assumption is what has made her a truly inspiring Makers Muse Recipient. Thank you, Marjane, for your wonderful contributions. We can’t wait to see what you’ll come up with next!

Keep up to date with Marjane’s work via her Facebook page.