Geraldine Juárez (México, 1977) is a pupil of the internet, her friends and Eyebeam, where she was Senior Fellow at…
http://www.simple-mechanisms.com

Until the end of this year we’ll be having weekly features on each of our Makers Muse Award Recipients. You’ll read their original writing, see some of their work and glean greater insights into what makes these seven individuals so unique in their fields.

To open our weekly features we have Geraldine Juárez, whose work is focused on the internet and in the street through a wide range of media. Her aim is to understand the spaces that emerge when information, property and power collide, with special interest in low, open and pirate technologies. (You can read her full bio here).

Geraldine’s piece, OCCUPY!, is a timely exploration of how she is viewing, experiencing, framing and taking action within the Occupy Wall Street movement currently taking place worldwide.

I often explore the tension around material and immaterial appropriation, tinkering with tools and performing actions that are able to hack and circumvent property systems that I don´t agree with. I learned everything about appropriation during my fellowship in Eyebeam, where I met inspiring people that shared their knowledge and taught me how to make stuff, no matter if it’s art or not. By using methods of hacking one is able to turn infrastructures over and use them to your advantage, creating your own structures.

So yeah. Hacking. We hear all the time about hacker this, hack that…often related only to the paranoia of governments. But we can all be hackers really. And hacking is not only about computers, is about systems. Whether it is a legal, political, urban or art system, if it’s closed I´ll probably be interested in opening it up, even if it’s only a bit. Probably, it is all the fault of a text of McKenzie Wark that I hold dearly:

02. Whatever code we hack, be it programming language, poetic language, math or music, curves or colourings, we create the possibility of new things entering the world. Not always great things, or even good things, but new things. In art, in science, in philosophy and culture, in any production of knowledge where data can be gathered, where information can be extracted from it, and where in that information new possibilities for the world are produced, there are hackers hacking the new out of the old.

Now, it seems so important that I learned how to approach things and situations from a hacker perspective in New York, a place where so much happens, so much property is concentrated and the fight for resources is very evident. Politics, as a constant struggle for resources, it is so evident there. 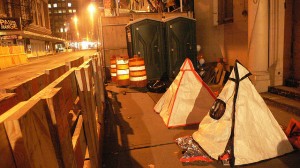 Funding (not only for the arts) is a fundamental part for creating new infrastructures and part of my work has explored collaborative funding structures. Today, seeing how the OCCUPY movement in New York, around the US (and everywhere) is thriving using collaborative based infrastructures to find a way to reach autonomy I am really thinking how an experiment can actually became a tool. And all these occupations are really super inspiring… So I promise to launch soon this little funding project inspired on all this amazing exercises on decentralization that are happening all over the world and its networks.

As Chris Carlsson says, there is a lot to do, but we are constantly busy with other things that do not let us do the work we need to do. People spend their lives in jobs that are not necessarily work. That is why bankers have jobs where they do something that benefits no one anymore, while the 99% need to work hard to try to get by.

No matter if we are in Mexico, the US or really, anywhere in the world, we are part of the 99%. Solidarity pushes me to preoccupy myself by  tinkering and making new models that can help us all imagine how to turn the system against itself to make it a bit more fair, using this amazing opportunity that Kindle Project awarded me to support back.

I occupied downtown New York City for a night on 2008 on the midst of the financial meltdown with Adam Bobbette, my greatest instigator and whom I miss making forays with so much. Maybe, these tools we made can be helpful now for you all.

Using simple tactics we might open up new resources for those who don’t have them and against a world in which everyone is telling us they are so scarce.  So, occupy!

Forays with Steam. from forays on Vimeo.