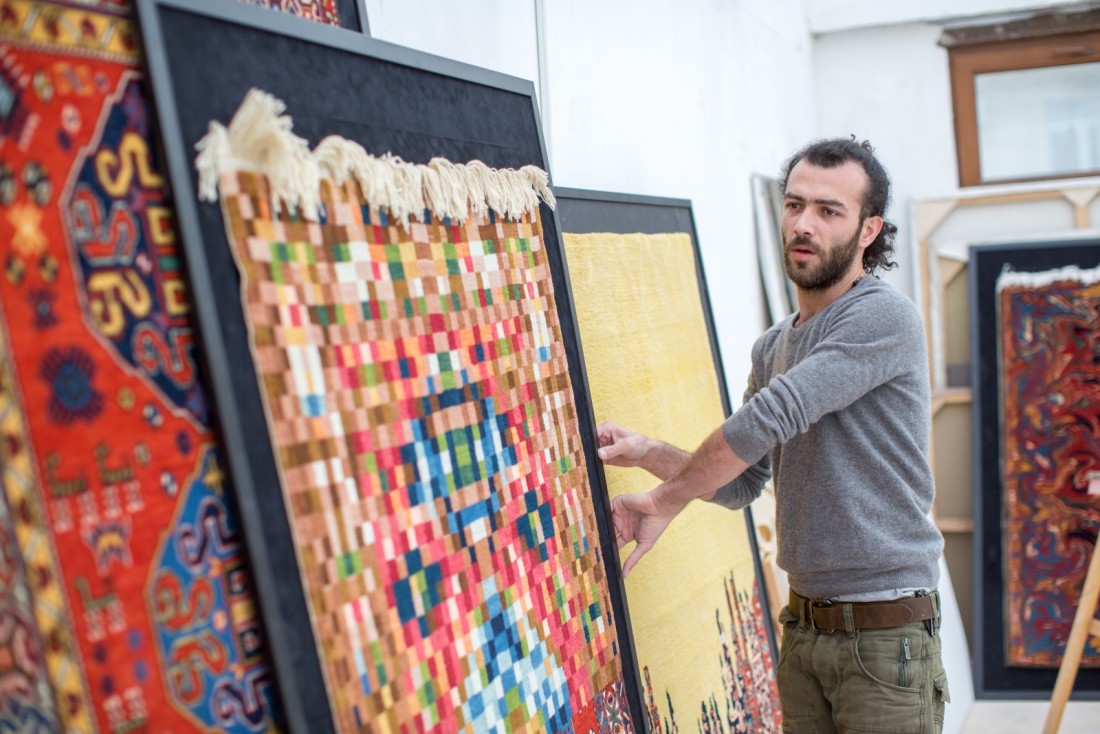 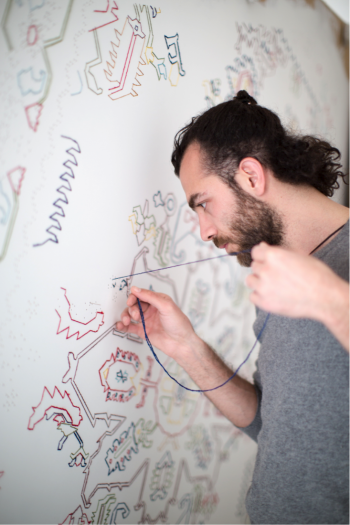 Faig Ahmed
Faig Ahmed graduated from the Sculpture faculty at the Azerbaijan State Academy of Fine Art in Baku in 2004. Since…
http://www.faigahmed.com/

I explore ancient traditions, cults and cultures, I make my own research and as I communicate with it, I create art. My carpets, installations and embroideries are the result of this interplay. It is fascinating to observe the process of such an easy transformation of such ancient and stable objects.

I am in love with textile. Because fabrics are objects that humanity is using from the beginning of times, till nowadays. Another thing that interests me is pattern. Patterns and ornaments can be found in all cultures, sometimes similar, sometimes very different. I consider them words and phrases that can be read and translated to a language we understand.

My art is an experiment. I want to examine the subject matter to see how deep can we go inside something accomplished and holistic and to observe the influence this kind of a change can have on people.

What influences and inspires me the most are all kinds of travel. By saying travel I mean either physical travelling to other countries where I can find and explore traditions and cults spread on this certain territory; or travelling in my subconsciousness, different practices and meditations.

And there is something I believe: If you want to change the world, start with yourself.

Images from the studio, my workshop, and my brave and creative team 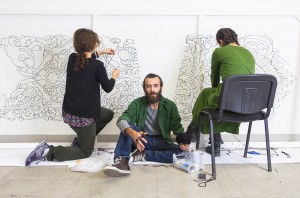 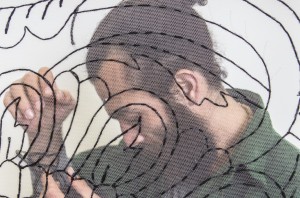 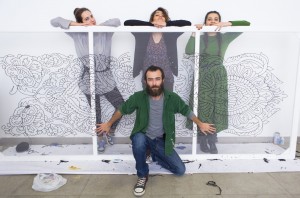 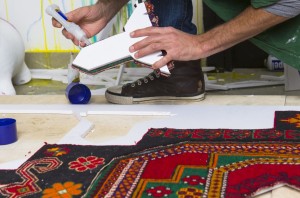 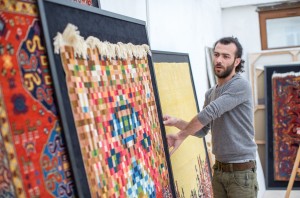 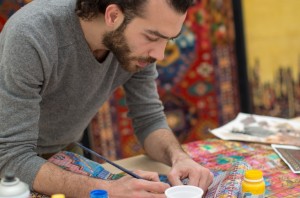 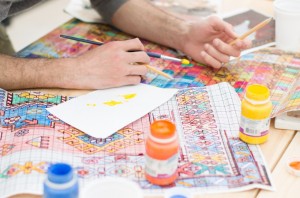 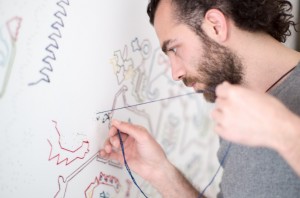 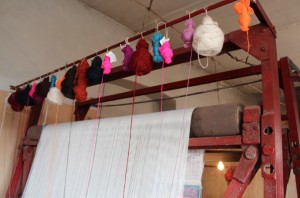 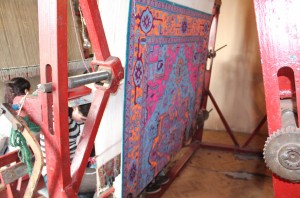 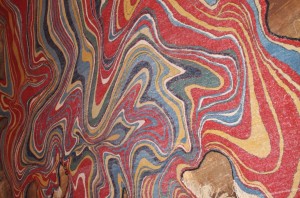 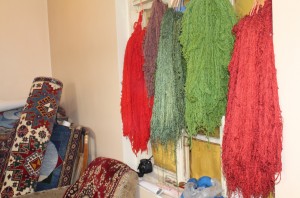 The story of one Carpet
Recycled Tradition 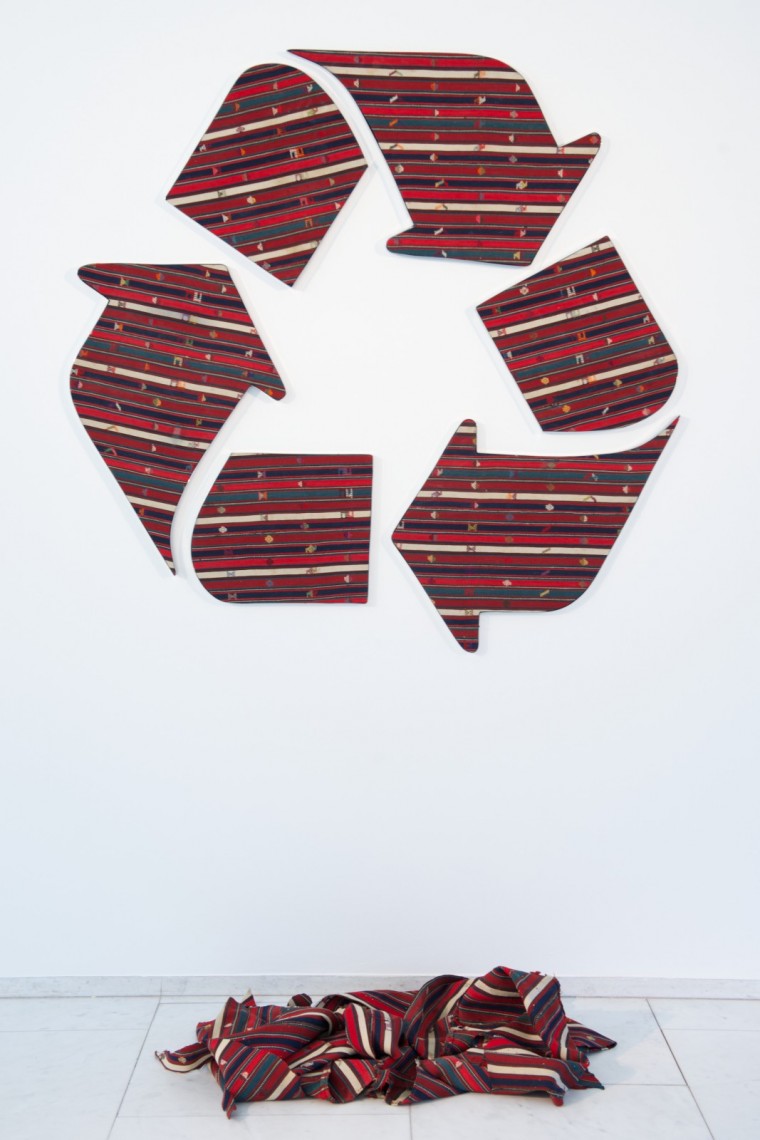 The idea of this artwork was born from the depth of the “transformed carpets” concept. Initially I have written a deep theory of recycled culture analysis. It was a typical cold analysis of the theme that I was working on. But the story I have lived through has made a great impact on me and I felt that this is the true and honest concept of the artwork. I started to work 4 month before production to find a right carpet. What I needed was 150-200 year old carpet to be cut in the form of “recycled” symbol. I have a carpet sales guy who is helping me with production and I asked him to help me with finding a right old carpet in a good condition. He showed me different options while we were having tea in his workshop and I’ve liked one of them. I wanted to start cutting it immediately after leaving the workshop. And with my heart cold I’ve asked him where did he get the carpet. And he told me the story.

Actually there are gypsy guys who buy and resell old carpets. They suggested visiting an old woman who had a beautiful old carpet in a perfect condition. She is living in Southern Azerbaijan. But this woman has rejected selling it because she had this carpet from her grandmother and it was the only thing she could take with her from her father’s house when she got married. It was a tradition in old days Azerbaijan. This woman couldn’t take anything from her home because her parents were against her marriage and only her grandmother had supported her, gave her this carpet and helped running away with her lover.

After several visits and after she knew the carpet will be sold to an artist she agreed to sell it. Having another glass of tea I’ve found this carpet in a historical book. I read that this was the Garabakh carpet which is another part of Azerbaijan. This lady can’t go there anymore! Because this territory is occupied by Armenia. And there is war footing at the moment. So, when I took a cutting knife to cut the carpet I couldn’t do it. Suddenly, I realized that I’m also a hostage of the tradition! This story’s impact on me was so huge that I couldn’t destroy this carpet with my own hands. I’ve passed it to an art production company to prepare it for me and didn’t tell them how old it was.

I always thought that my mind is cold and I’m totally impersonal and that the tradition is only a part of history. But when you touch it directly it changes. I’ve felt the responsibility for everything I do and now this artwork is a part of the recycled tradition and it carries not only this story but also my own.

Last time when I was in our workshop I was fascinated by the surrounding sounds. The carpet has its own spirit and this is how it speaks to you.

Faig Ahmed graduated from the Sculpture faculty at the Azerbaijan State Academy of Fine Art in Baku in 2004. Since 2003, he has been working with various media, including painting, video and installation. Currently, he is studying the artistic qualities of Azerbaijani traditional rugs – he disassembles their conventional structure and randomly rearranges the resulting components of the traditional composition then combines these fragments with contemporary sculptural forms. Born Baku, 1982 Lives and works Baku.