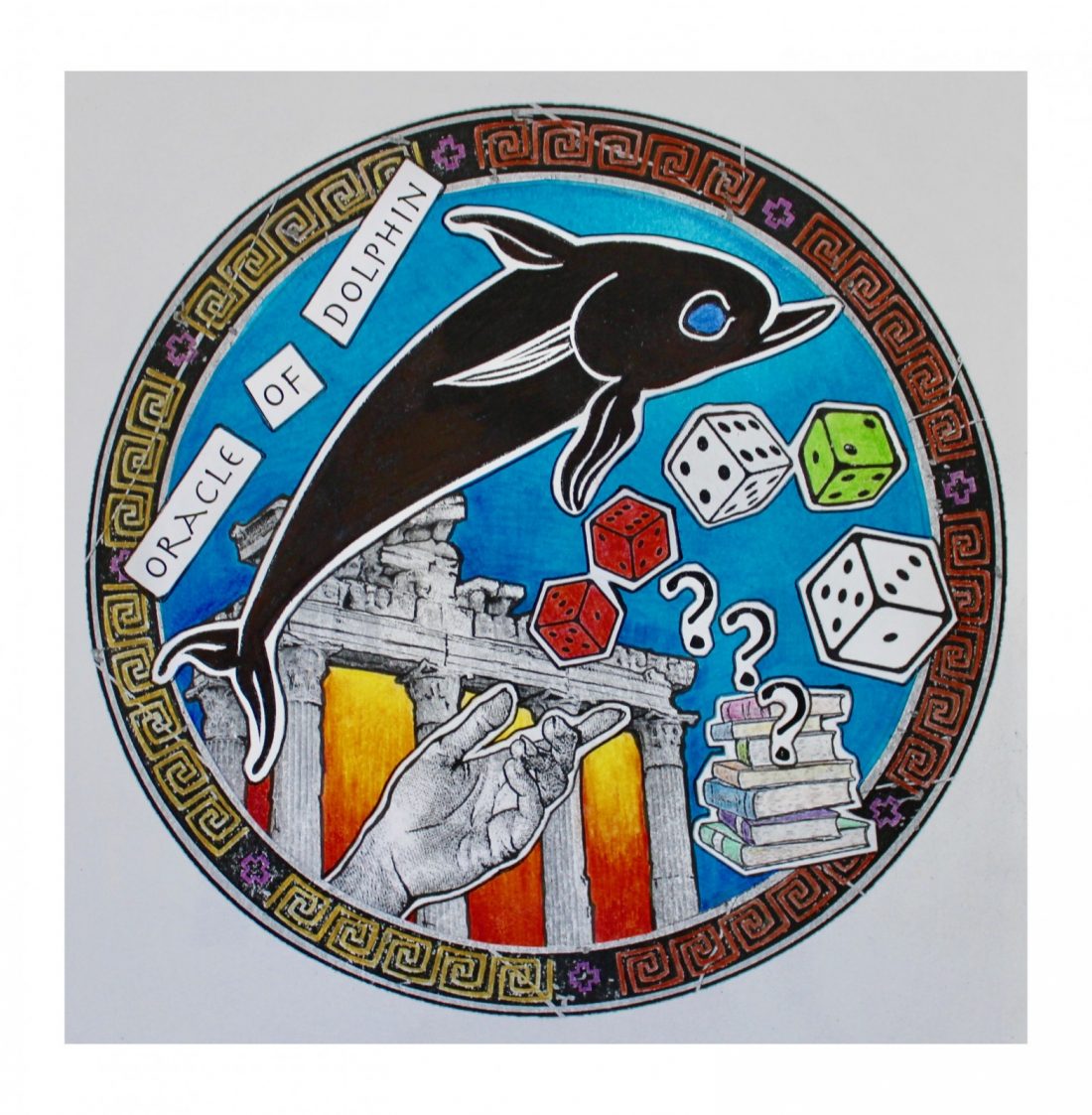 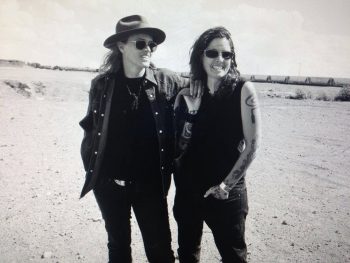 Beth Hill and Bett Williams
Beth Hill “The Mad Framer” is a fine art framer and precision woodworker. She has designed custom frames for the…
http://www.themadframer.com
Beth was setting up her new woodshop when she came inside the house feeling dizzy. She had been trying out a new propane heater. I was in the middle of reading about The Oracle of Delphi. I didn’t know that the women who spoke prophecy, the Pythias, were under the influence of a gas that seeped up from the flagstone in the floor of the ancient cave-like structure. As Beth got her bearings, she said that we should take advantage of her altered state. Maybe she had oracular powers.“Oracle of Dolphin!,” I blurted by the stove, and it was born.

Finding its home on Instagram, Oracle of Dolphin is both an oracle and a literary exercise. Write in and ask us a question and with dice we will find the page in a chosen book where your answer lies. Beth puts together the collages and graphics. An Alice Notley book instructed a seeker to bury tourmaline in the dirt to relieve them of a haunting. Claudia Rankine’s “Don’t Let Me Be Lonely”, and a particularly pointed divination, was instrumental in guiding Alicia Fishmeister to an informal residency in our backyard trailer. 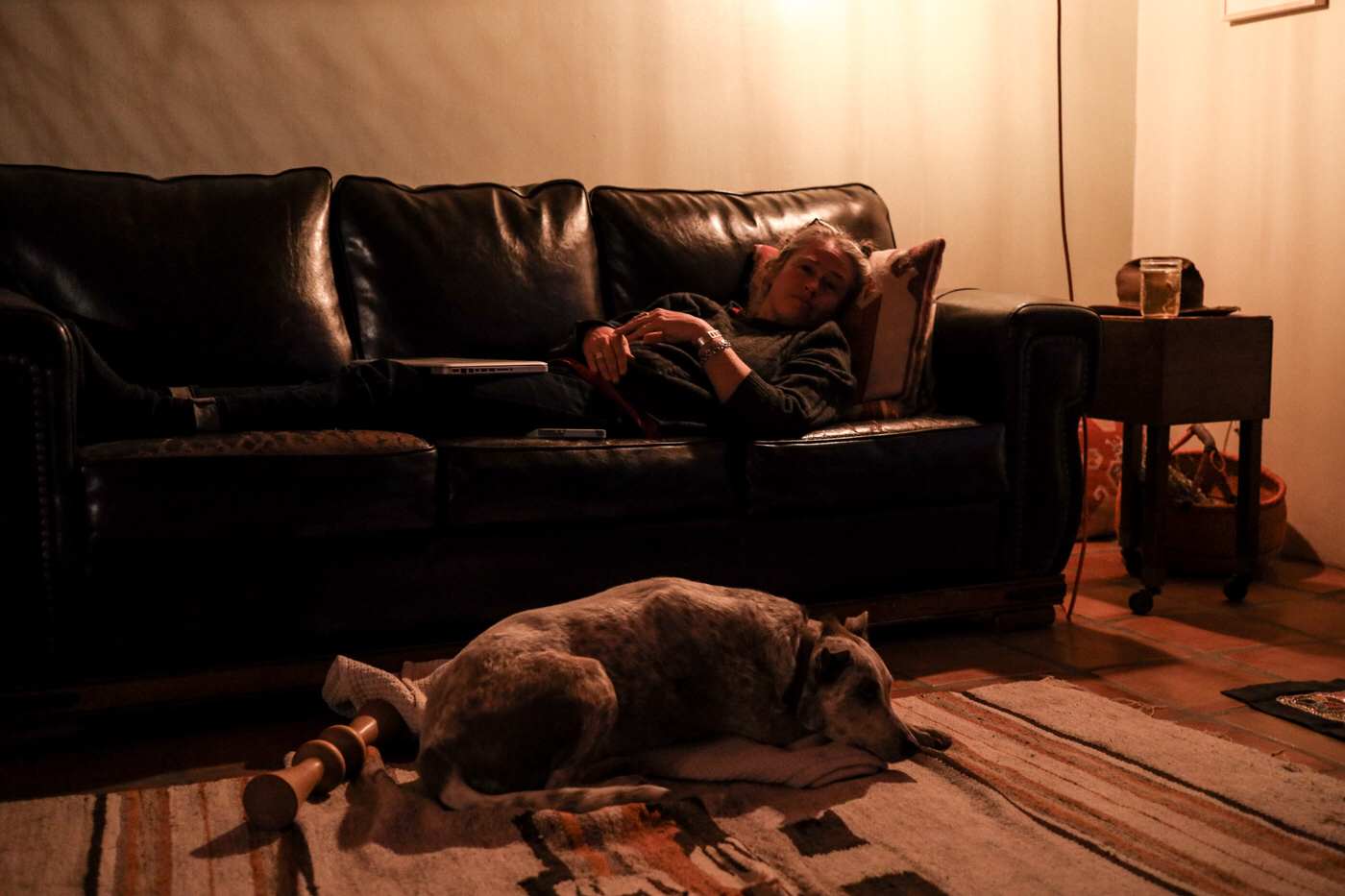 This is the photograph she took of me the night I finished the last draft of The Wild Kindness, my memoir about seven years of growing psilocybin mushrooms in New Mexico. I am very tired here. The final push took it out of me. I thought it was done a year ago, but feedback from Beth and smart friends guided me through four more passes and it’s now publishing house ready.

I spoke at the Horizons Perspectives on Psychedelics Conference in New York in November and will speak about growing mushrooms at home at the Queering Psychedelics Conference in San Francisco in June. But it’s the book that we are really excited about. Basically, Beth and I are collaborating on a psychedelic take-over of heretofore civilian spaces on a scale that surprises us every day. Doors keep opening up.

Our intention has been to demagnetize ourselves from the machinery of the failed project. Exist in interstitial zones. Be available to the intelligence of the mycelium. There are species of fungi mycelium that eats plastic. Others absorb oil and radiation. If there’s any hope at all for sustaining human civilization on earth beyond what is writ; it will have something to do with the mushrooms, I am sure of that. There’s nothing that a mushroom can’t fix, said Kai Wingo. It’s been scientifically proven that psilocybin mushrooms can help cure depression, addiction and ocd, and while I’m positive the mushrooms have done all these things for me, that’s not why I have taken them. I eat them to prepare my soul for this world.

No cures, only alchemy.

Excerpt from The Wild Kindness 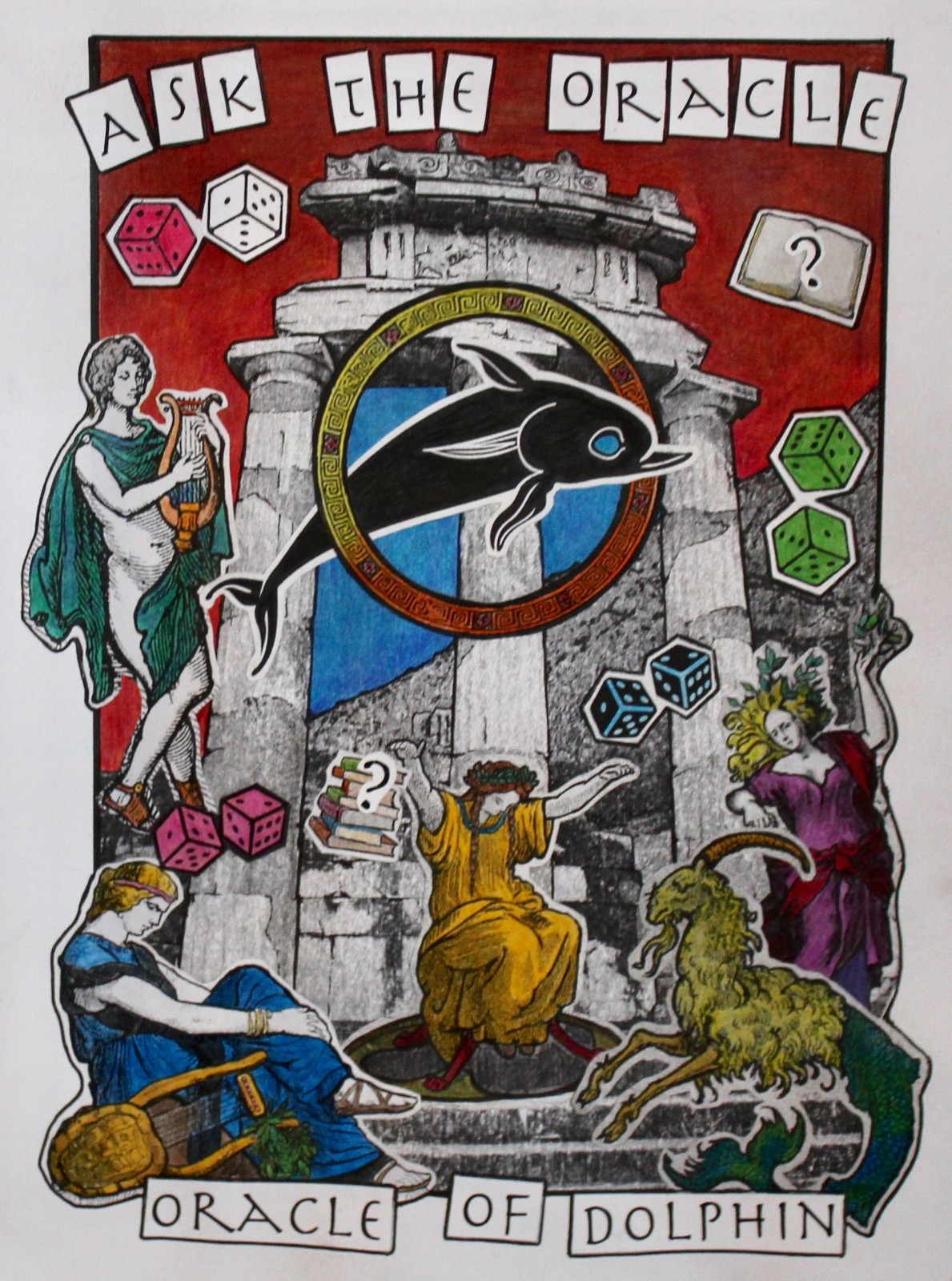