As the year draws to a close and 2012 may or may not signal the end of the world, we thought it only fitting that we wrap up this calendar year with a bang. Kindle Project Fund of the Common Counsel Foundation is pleased to introduce you to our Autumn grantees, whom we are so excited to welcome into ourKindle nook. These organizations and projects make up a strong network of dynamic risk-takers, pioneers, edge-walkers and community builders in some incredible fields that need our focused attention.

With nine new and six returning grantees on our docket this winter, we have an exciting year ahead.  We hope you will be as thrilled as we have been to learn more about their work, the people within these groups, and the movements that they are helping to grow and shift. From and with them, and with you, we’ll be learning about topics ranging from money in the US electorate to the creative use of gastronomy in the food justice movement, and so much in between! The creative and committed endeavors represented by our November 2012 grantees is nothing short of inspiring, a loud and clear call to action on so many fronts.

With voices strong, minds open, and brains collaborating, we are certain you’ll want to join us in 2013 as we get to know these folks and their work. Keep in touch with them here on our blog, check out their blogs and websites, and remember to stay informed with all kinds of Kindle news on our Facebook page. You can also visit the Nexus page on our website to see this list along with our Spring grantees. What a great year!

Amazon Watch is a nonprofit organization founded in 1996 to protect the rainforest and advance the rights of indigenous peoples in the Amazon Basin. We partner with indigenous and environmental organizations in campaigns for human rights, corporate accountability and the preservation of the Amazon’s ecological systems.

Bidoun Projects is a unique platform for the exchange and debate of new and unexpected ideas about Middle Eastern art and culture. Through the production of reportage, curation, and educational projects we encourage audiences to reconsider a region too often presented in a one-dimensional manner.

Founded as a public/private partnership between the New York State Unified Court System and the Fund for the City of New York, the Center for Court Innovation (the Center) helps the justice system aid victims, reduce crime, strengthen neighborhoods, and improve public trust in justice. The Center combines action and reflection to spark innovation locally, nationally, and internationally. The Center’s Tribal Justice Exchange launched the Peacemaking Program in the fall of 2012 in partnership with the Red Hook Community Justice Center in Red Hook, Brooklyn. Peacemaking is a traditional Native American form of dispute resolution that promotes healing and restoration.

The Center for Genomic Gastronomy is an independent research institute that explores the genomes and biotechnologies that make up the human food systems on planet earth. We are dedicated to the advancement of knowledge at the intersection of food, culture, ecology and technology. The Center presents its research through public lectures, research publications, meals and exhibitions. The Center has conducted research and exhibited in England, Germany, India, Ireland, Netherlands, Singapore and the US.

Center for Land Use Interpretation
http://www.clui.org/

The Center for Land Use Interpretation is a nonprofit organization which seeks to stimulate discussion, thought, and general interest in the contemporary landscape. We believe that the manmade landscape is a cultural inscription that can be read to better understand who we are individually, and as a nation.

The Center for PostNatural History is a museum and outreach organization dedicated to the documentation and interpretation of the living world that has been intentionally and heritably altered by humans through processes such as domestication, selective breeding and genetic engineering.

Citizen Koch is a feature length documentary about the influence of money in US electoral politics. Set against the Supreme Court’s controversial decision in Citizens United and the rise of the Tea Party and Occupy movements, the film explores the consequences for democracy when private interests determine who is elected to deliver public good. (Photo credit: Matt Wisnieski).

New Energy Economy was established in 2004 to create economic opportunity in New Mexico with less carbon pollution and more clean energy, and is grounded in principles of environmental justice. We are mobilized to secure a future without coal. New Energy Economy’s efforts include grass roots organizing, public policy leadership, smart litigation, targeted lobbying, media outreach and community-scale implementation projects. We work in partnership with diverse allies on policies that encourage job growth, investment and innovation in a more efficient, sustainable and equitable energy sector. We have focused on the policy level as well as on-the-ground meaningful energy efficiency and renewable energy projects.

The New Mexico Environmental Law Center (NMELC) was founded in 1987 by attorney Douglas Meiklejohn.  Since that time, its attorneys have represented clients on nearly 300 cases throughout New Mexico, primarily working with residents of low-income communities and communities of color.  We have expertise in solid waste, hard-rock mining, uranium mining, air quality, urban sprawl, water quality and quantity, dairies, oil and gas extraction, and climate change.  The Law Center’s goal in each case is to achieve the environmental protection objectives of its clients.

Other Worlds Are Possible Giving Circle

The Other Worlds is a collaborative that works to inspire hope and knowledge that another world is possible, and helps build it. It compiles and brings to light political, economic, and social alternatives that are flourishing throughout the world, and helps the public open up new pathways to adapt and replicate them. The team of five women is currently focused on three programs: (1) Harvesting Justice, strengthening and publicizing the transformation of food, land, and agricultural systems in the Americas; (2) Another Haiti Is Possible, offering alliance to social movements in Haiti as they work to raise a more equitable and just country from the rubble of the 2010 earthquake; and (3) Alternatives Education, documenting and broadly sharing victories and alternatives surging around the world. All Other Worlds’ work has an emphasis on women. 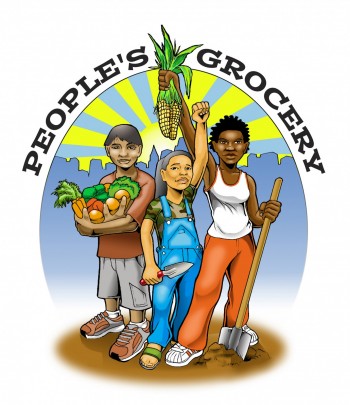 People’s Grocery operates at the intersection of public health, economic development, and food systems. Our mission is to improve the health and local economy of West Oakland through investing in the local food system. Using West Oakland as a model of leadership development, micro-enterprise creation, urban gardening, and health project development, we aim to support and develop a thriving network of like-minded change-agents in cities across the nation.

The Santa Fe Art Institute promotes and presents art as a positive social force. Community-based and international in scope, we believe that art plays a central role in civic life and that artists’ voices are essential to understanding our complex world. We support creativity, and enable access to the arts through residencies, public lectures, workshops, exhibitions, school- and community-based arts education, and outreach.

Seed Broadcast is a generative project exploring grassroots food and seed sovereignty through collective inquiries and hands-on creative practices. Throughout the year, we initiate community projects to examine critical issues surrounding seed and food sovereignty, visit local farms and gardens to experience what is happening first hand in the field, and engage in creative strategies to dig deeper into the real, often unheard, stories of local agriculture. Seed Broadcast believes that local communities hold a genius of place that nourishes the core of sustenance.  We seek to reveal this innovative knowledge, while pollinating creative practices, which animate the saving and growing of local seeds, to provide an avenue for the revitalization of localized, sovereign, food sources.

Women on Waves, a Dutch non-profit organization was founded in 1999.  On the invitation of local women’s groups, Women on Waves sails with a Dutch ship to countries where abortion is illegal. Outside the territorial waters, the abortion pill can be provided safely and legally to women with unwanted pregnancies. While in harbor, the ship also hosts several programs, such as contraceptive distribution, counseling, education and workshops for different professionals organizations. The ships campaign in Ireland (2001), Poland (2003), Portugal (2004), Spain (2008), and Morocco (2012) created enormous public interest. The campaign in Portugal catalyzed the legalization of abortion in February 2007.