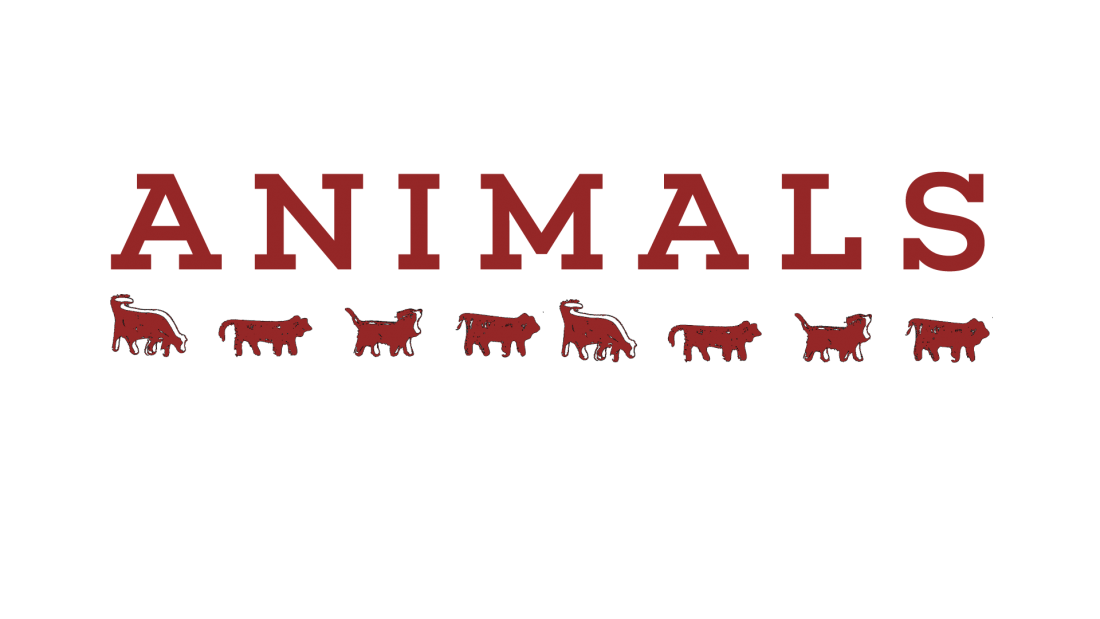 What were the initial sparks that got you started on the path to make this film?
I had always wanted to make a doc film but I knew it would have to be something I was really passionate about. It dawned on me one day that young, inner city culture/fashion of NOLA [New Orleans] in the 90’s has never been documented. I’ve never seen anything about our fashions, which is a story unto itself. NOLA is growing into a different place right now. However, in the 90’s NOLA was really a bubble in and of itself, an island in the middle of the United States. We grabbed ideas from different coasts in terms of music and culture but we did our own thing with it. There was this one particular shoe made by a company called Bally, which was a big fashion in New York at the time. When this particular shoe, the Bally Animal, arrived in NOLA the city really commandeered it. At some point in time the Bally store in NOLA started requesting this shoe from all the other Bally stores in the United States. It was a fashion we only wore down here. That was a reflection of how we lived. We didn’t know that the way we wore our clothes was different.

Another reason why I wanted to make this film is because anytime I bring up the topic of this shoe to people in this city it brings up so many emotions and excited memories. I’m trying to paint a picture of NOLA in the 90s’ when i was growing up from the perspective of the people that lived there, wore those shoes, it’s all about the culture. They stopped selling this shoe in 1995. I feel like whenever you see young black people especially on TV it’s about entertainment or sports or on the negative side of representation it’s about violence or drugs. That’s not painting the full picture of people in this world. People in the film are talking about their emotions, good times, class, status, and what made them happy. We all want to be portrayed in a real light.

Did you have a favourite moment while working on ANIMALS?
I’ve had a lot. All my conversations have been great. The most interesting part of this is that I went to Switzerland I got an interview with a woman who works at the Bally museum. To sit down and talk to her about the phenomenon of this Bally shoe in NOLA was incredible. They had never heard of anything like this in their lives. And, to find out why the shoe was made was also very exciting. Bally originally made this shoe for a very particular reason, it was different from any other shoe they had designed in the past. It was created to commemorate the 700 year anniversary of the Swiss Federation. To celebrate this in 1991 they made the Animal shoe, which was distributed across the United States, but ended funneling into New Orleans. On a personal level I always wanted a pair, but in 1991 these shoes sold for $300 a pair! There’s an interesting passion around this shoe and this woman from the museum and I were both looking at each other in awe. 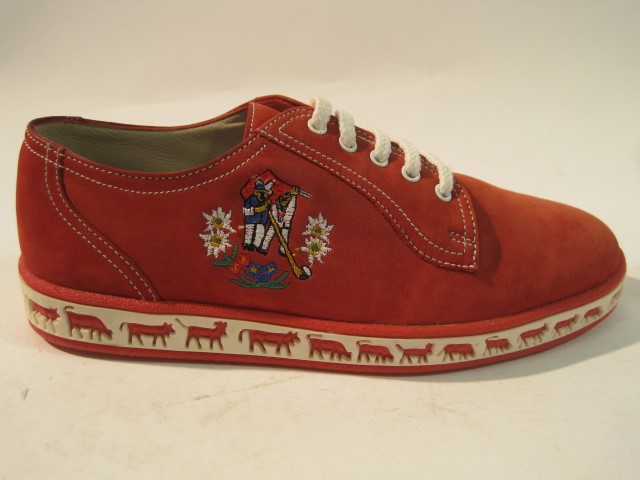 What was your experience of receiving a Flow Fund from Taslim?
Honestly, I was speechless. I’ve been funding this all myself because I felt strongly enough about it. If money comes in for it, fine. If it comes outta my pocket, fine. I was in Europe when she told me that she had nominated me for this grant. It was still in my head that it was something that might happen but I didn’t know for sure. I was just so happy to be nominated. Honestly, it made me feel so warm. How can I put it in words? It felt good that something I am passionate about generated enough love from someone that they wanted to include me in something like this. It was very unexpected. I’m really grateful for it. It was totally a blessing.

What are you going to do with your Flow Fund grant?
I’m going to use it for post-production for the film and for marketing of the film.

Here’s what artist Flow Funder, Taslim van Hattum, had to say about nominating Benjamin. (Click on each image to read the text.) 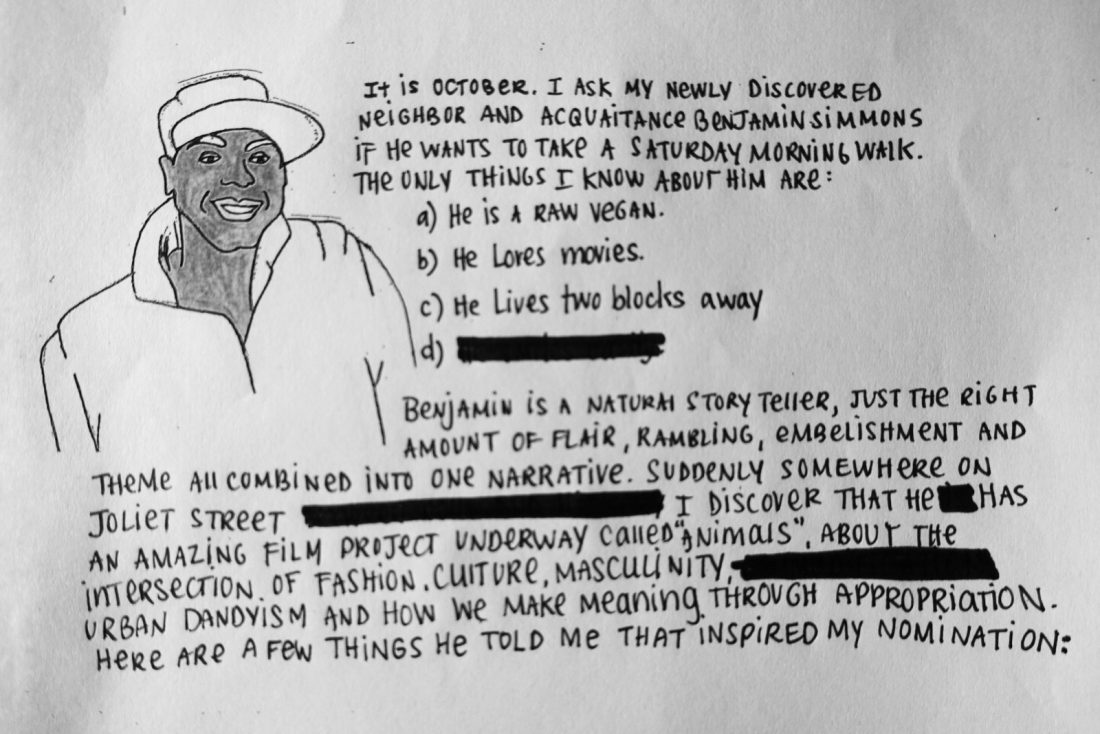 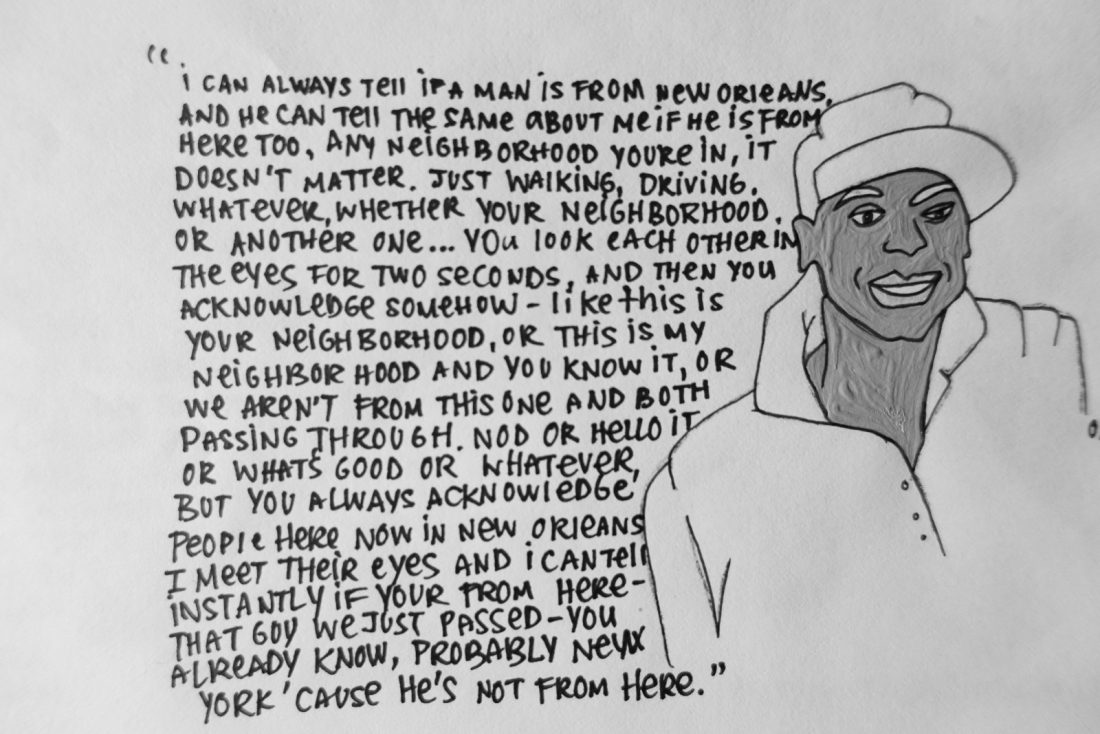 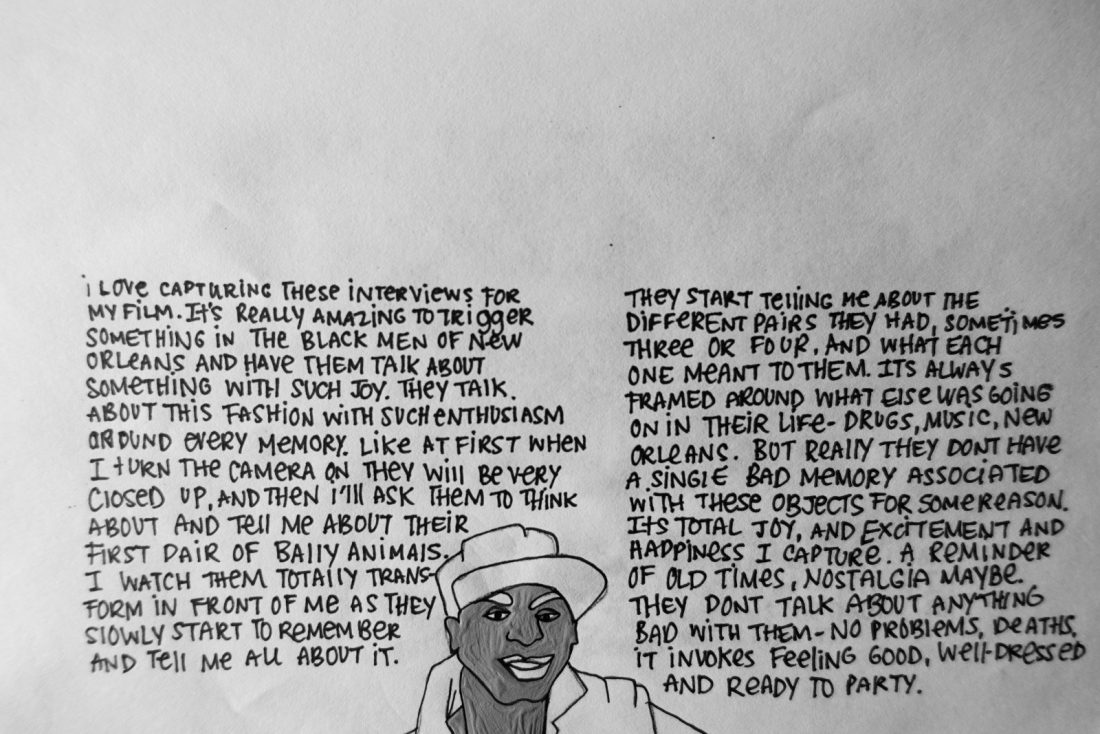 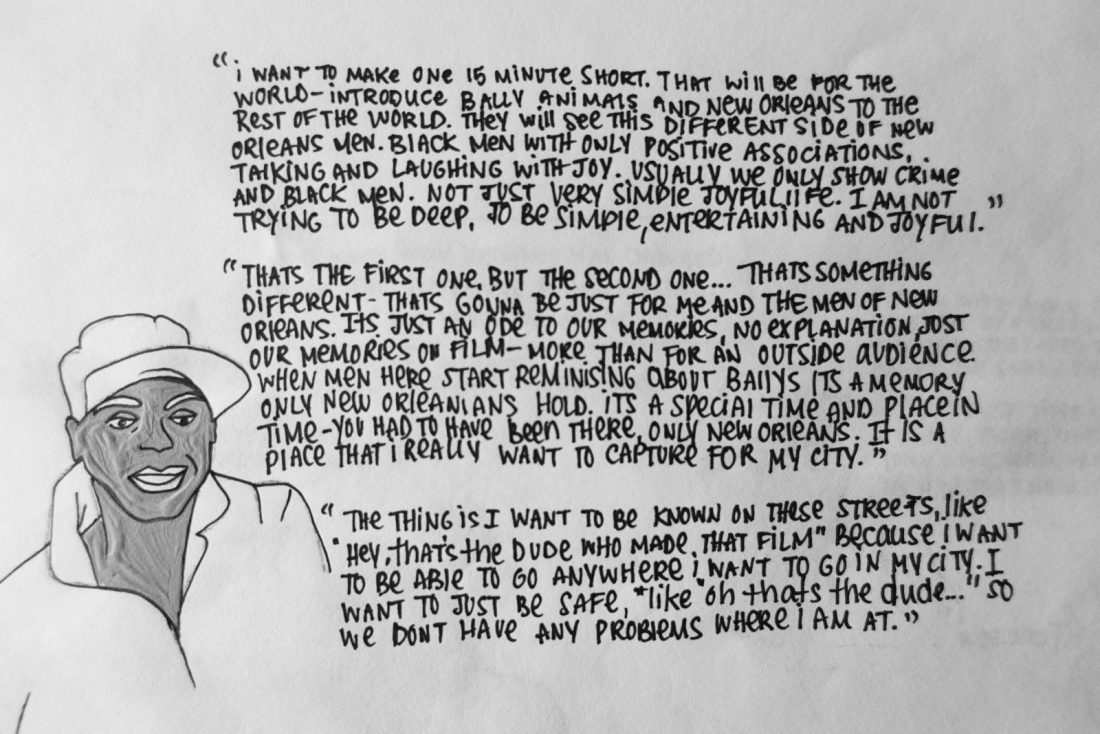 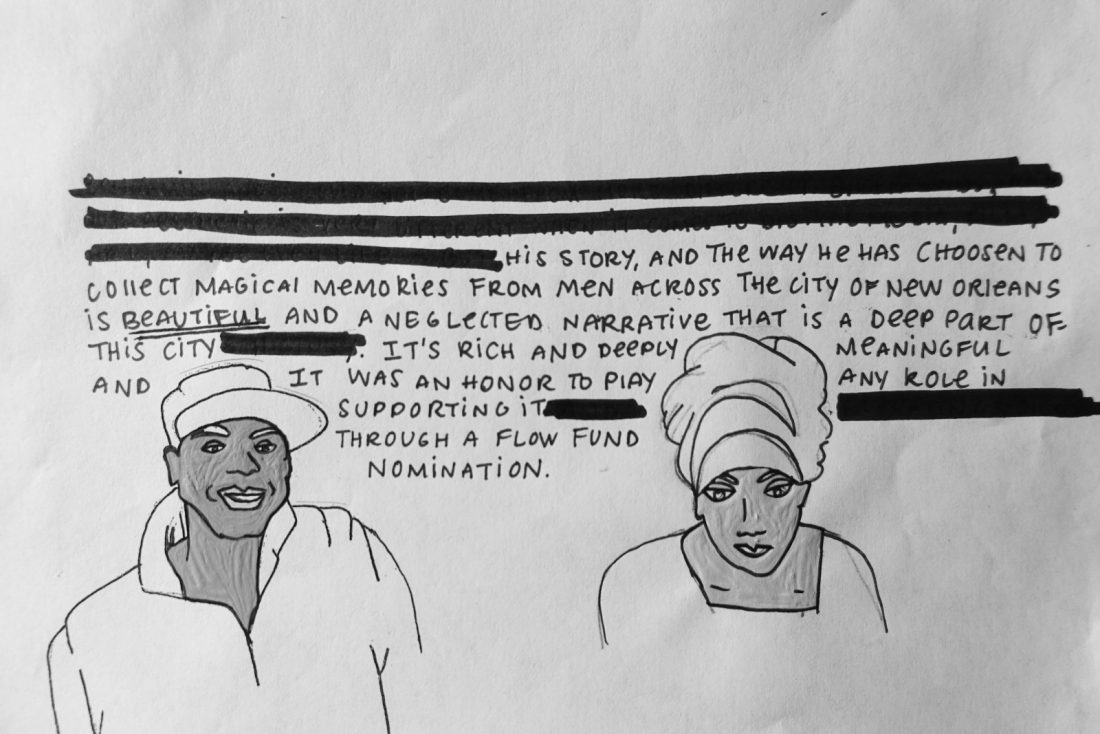 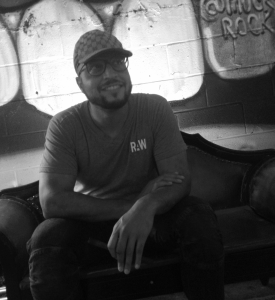 A little more about Benjamin:

I was born by the river, kinda.

Actually I was born in New Orleans East, laid my head downtown, and ran through the streets uptown which is where I reside today.  I attended McMain High School as well as Xavier University, and have been filming here since 2010 after moving back from a 7 year stay in Los Angeles.

I wanted to do this film because 20 years after production of the shoe stopped, it is still a strong echo in the culture of New Orleans.  To this day, it conjures memories of good times and puts a smile on the faces of those that remember it.