Academics, activism and the spaces in between

Kindle Project has had a long relationship with Oakland’s United Roots: an organization that engages Oakland, California’s marginalized youth with media, arts, career training, and wellness services. We have watched this organization change and grow over the years and are perpetually motivated and impressed by their mission and commitment to their community. So much of what United Roots does is based in personal storytelling; using media, music, and movement to express a personal narrative. United Roots leaders engage in these forms, always practicing what they preach, modeling the impact of these tools for the youth they work with. Last year we featured the story of Galen Paterson, United Roots’ Co-Executive Director, and this year we’re sharing Co-Executive Director Simmy Makhijani’s story. Galen and Simmy’s personal histories weave together the complex and deeply passionate stories of the greater Oakland community. It is personal stories such as these that allow us to not only learn more about the leaders of the organizations that we support, but to understand the reasons why they do the work they do with such fervor. Over the coming months, we’ll be exploring more stories of the people behind the projects we fund. 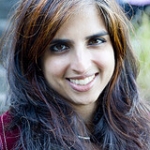 Simmy is Co-Founder and Co-Executive Director of United Roots, and is also currently completing her PhD in the Social and Cultural Anthropology Department at the California Institute of Integral Studies.

In speaking with Simmy, I received an elaborate and well-illustrated account of Oakland’s rich history and why it is what it is today. Through her broad knowledge of the layered history of Oakland and its movements for civil rights, justice, and racial and economic equality, Simmy uncovers the current context of the area’s diverse and often adversarial neighborhoods. Simmy shared some troubling statistics with me: “The moment we’re in now in Oakland (is one) where one person is killed every four days, 9 out of 10 male, 8 out of 10 African-American, 8 out of 10 shot by some kind of firearm, 3 out of 4 killed on a public street, and 30% of those killed are young adults between ages 18-25.”  (See urbanstrategies.org for Homicides in Oakland Report.)

Oakland, California has a special almost frenetic energy to it, not only because of its staggering crime rates, but also because of its rich cultural, artistic, and activist presence. Knowing the kinds of adversities that the young people are facing there, and that the mission of United Roots is to help them express themselves, it’s no wonder that Simmy is moving her work towards a more central focus on healing. “Many frontline activists skilled at violence mediation have retreated; youth leaders such as those of our Turf Unity project are pulling back right now,” she said, “having lost many of their peers in the process of conflict resolution efforts. In this time of retreat, prayer circles and meditation groups are forming, and different moments of self-reflection are emerging naturally.”

In speaking with Simmy, her academic prowess was evident, yet, the ways in which she combines her PhD, her activism and her role as Co-Executive of Director of United Roots, are clear responses to her holistic understanding of what this community needs. The situation is so dangerous there that even the frontline activists are pulling out, and to Simmy, this points clearly to the sign that deeper levels of involvement must begin to take shape.

I asked her about her current academic focus and how it intersects with her activism, and she replied:

“So, returning to my PhD this semester has been about using the resources of the Academy, the privilege of having had this education, for the purpose of looking at how practices of social liberation and spiritual liberation have together created Movement, whether it be the Civil Rights or Black Power movements, Zapatista, or anti-colonial, landless unorganized labor movements of India.

Even more, what I’m interested in is how these intersections relate to the young people that come through the doors of United Roots. What would happen if we were able to provide, alongside our mainstay of programs in the media arts, a developed curriculum that offers context of these rich, powerful histories and practices? What would be possible if the youth themselves, with such context, were able to draw from, perhaps even reinvent their own understanding of mindfulness, using the arts as a means for relating to their everyday experiences and for experimenting with ideas of social revolution in the present? What kind of healing could emerge? What kind of creativity? What other possibilities for change? What might the streets of Oakland look like then?”

While Simmy is in the process of asking these questions and beginning to plan how these will be answered in the United Roots context, it is clear that this community is ready for this kind of inward learning as a part of the much-needed healing process.

Spiritual activism is a necessary bridge to what is taking place on the streets in Oakland—people are trying to find ways to heal, and a large part of the work of United Roots is to help bridge that gap between crisis and healing. From my conversations with Simmy and Galen and when visiting the studios myself last year, it’s clear how media, music production and creative community have a very serious and impactful role in the healing process of this community.

When a crisis like a shooting takes place in Oakland, United Roots focuses their efforts on bringing young people into their space and into the studio as soon as possible. This is one of their most marked accomplishments—using media and the arts as a direct tool to deal with trauma. By engaging youth in the creative process during a time of trauma, they are offering not only a tangible avenue for healing, but also the means with which to communicate positive messages from and about their community in an otherwise volatile context.  A quick browse on the United Roots website gives great insight into these accomplishments and their sustainable effects on the young people who are lucky enough to have found United Roots as a safe place.

“We don’t know what the fate of UR will be”, Simmy commented. “Crises on the streets as the older conflict resolution methods aren’t working, foundations are shutting down, but at the same time things are opening up, we’re gaining a larger public stage and there’s a responsibility for any of us doing this work. It’s time to step up, learn from our history so that we can be a part of building that future.” Simmy’s words echo the honest sentiment of United Roots itself. Steeped in committed optimism with an innate knowing of the micro and macro changes needed to make Oakland a safe and nourishing place to live.

Simmy provided the links below for further information about some of the issues discussed above:
Siddha Yoga Prison Project
Catalyst Project
Spirit in Action (pilot launched in San francisco before it went nationwide)
Training for Change
Highlander Research and Education Center