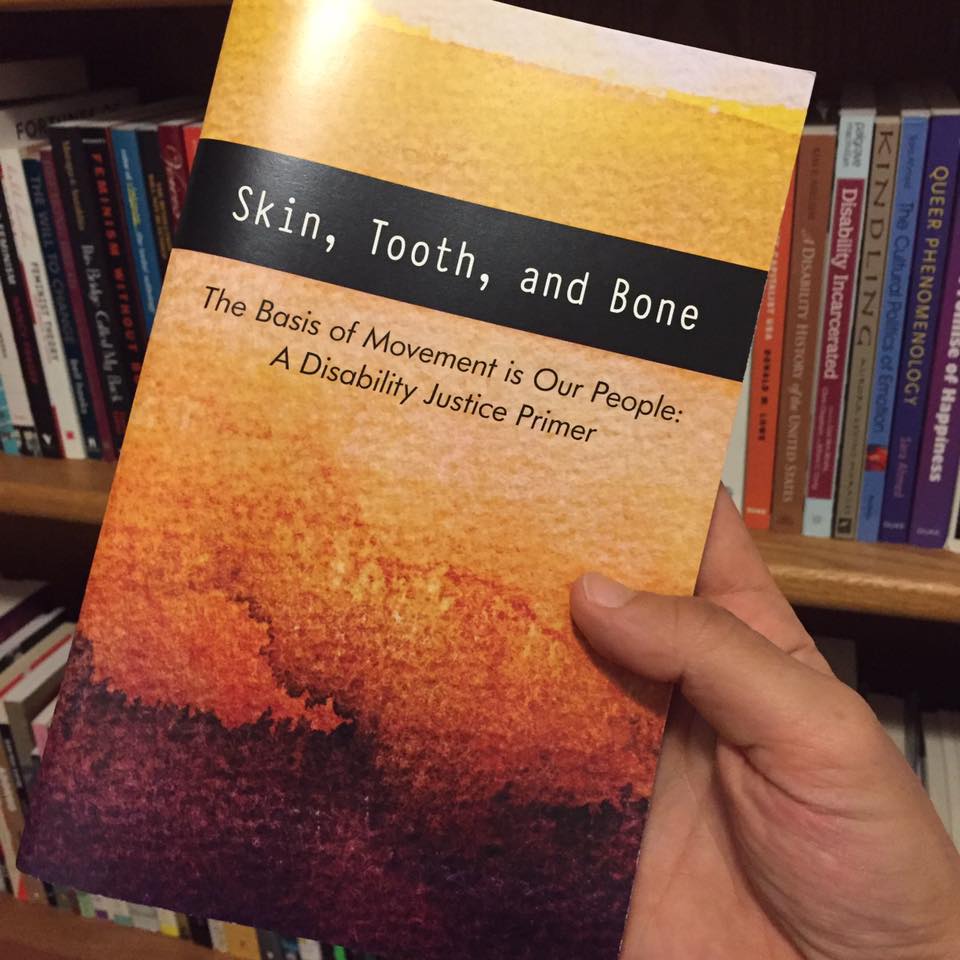 The following is an excerpt from Skin, Tooth, and Bone, a primer on disability justice written by Sins Invalid. We are excited to share our writing with the Kindle Project community. Although this excerpt, entitled “Disability Justice: A Working Draft”, was published within the primer in 2016, the issues it addresses remains ever relevant. We observe profound ableism within society most broadly yet also in our activist, organizing, social justice spaces. At the macro level, the current United States administration has proven to be actively hostile, enacting violence towards disabled people. These scenarios evidence the growing necessity of disability justice for our collective liberation.

In recent years, on websites and new media locales, on flyers and in informal conversations, I’ve witnessed people add the word “justice” onto virtually everything disability related — from disability rights based services and access audits to disability scholarship — while doing nothing to shift either process or end goal, thinking that the word change alone brings that work into alignment with disability justice.

Not so. What follows is a working draft definition of disability justice, a living document that will grow and change along with our emergent movement. It marks a point of departure rather than a destination, and an invitation for those of us living an engagement in disability justice to continue to support one another to find a language as powerful and expansive as our movement’s visionary praxis.

I’d like to start off with a quote from Aurora Levins Morales’ book Kindling:

“There is no neutral body from which our bodies deviate. Society has written deep into each strand of tissue of every living person on earth. What it writes into the heart muscles of five star generals is distinct from what it writes in the pancreatic tissue and intestinal tracts of Black single mothers in Detroit, of Mexicana migrants in Fresno, but no body stands outside the consequences of injustice and inequality…What our bodies require in order to thrive, is what the world requires. If there is a map to get there, it can be found in the atlas of our skin and bone and blood, in the tracks of neurotransmitters and antibodies.”

There was phenomenal and historic work to develop the disability rights movement in the U.S., and it had many successes in advancing a philosophy of independent living and opening possibilities for people with disabilities through the establishment of civil rights for people with disabilities. Like other movements, the current disability rights movement includes advocacy organizations, service provision agencies, constituency led centers, membership based national organizations, as well as cultural and academic spaces.

And, like many movements, it is contextualized within its era of emergence and left us with “cliff-hangers”: it is single issue identity based; its leadership has historically centered white experiences; its framework leaves out other forms of oppression and the ways in which

privilege is leveraged at differing times and for various purposes; it centers people with mobility impairments, marginalizing other forms of impairment; and centers people who can achieve rights and access through a legal or rights-based framework. The political strategy of the disability rights movement relied on litigation and the establishment of a disability bureaucratic sector at the expense of developing a broad-based popular movement.

In response to this, in 2005, disabled activists of color, originally queer women of color incubated in progressive and radical movements that did not systematically address ableism – namely, myself, Mia Mingus, and Stacey Milbern, soon to be joined by Leroy Moore, Eli Clare and Sebastian Margaret – began discussing a “second wave” of disability rights and ultimately launched a framework we called Disability Justice.

Given the isolation enforced by ableism and classed boundaries, many of us have often found ourselves as agents of change from within our respective communities and isolated from in- person community with other disabled people of color or queer or gender non-conforming crips, finding “liberated zones” instead online. In many ways, Disability Justice is a nascent framework that some call a movement, still identifying the “we” – sometimes in fluid spaces and sometimes in each others’ hoped and spoken words, touching each other through the echoes of those we mentor close by.

Disability Justice activists, organizers, and cultural workers understand that able-bodied supremacy has been formed in relation to intersecting systems of domination and exploitation. The histories of white supremacy and ableism are inextricably entwined, both forged in the crucible of colonial conquest and capitalist domination. We cannot comprehend ableism without grasping its interrelations with heteropatriarchy, white supremacy, colonialism and capitalism, each system co-creating an ideal bodymind built upon the exclusion and elimination of a subjugated “other” from whom profits and status are extracted. 500+ years of violence against black and brown communities includes 500+ years of bodies and minds deemed dangerous by being non-normative – again, not simply within able-bodied normativity, but within the violence of heteronormativity, white supremacy, gender normativity, within which our various bodies and multiple communities have been deemed “deviant”, “unproductive”, “invalid.”

A Disability Justice framework understands that all bodies are unique and essential, that all bodies have strengths and needs that must be met. We know that we are powerful not despite the complexities of our bodies, but because of them. We understand that all bodies are caught in these bindings of ability, race, gender, sexuality, class, nation state and imperialism, and that we cannot separate them. These are the positions from where we struggle. We are in a global system that is incompatible with life. There is no way stop a single gear in motion — we must dismantle this machine.

Disability Justice holds a vision born out of collective struggle, drawing upon the legacies of cultural and spiritual resistance within a thousand underground paths, igniting small persistent fires of rebellion in everyday life. Disabled people of the global majority — black and brown people — share common ground confronting and subverting colonial powers in our struggle for life and justice. There has always been resistance to all forms of oppression, as we know through our bones that there have simultaneously been disabled people visioning a world where we flourish, that values and celebrates us in all our myriad beauty.

From my vantage point within Sins Invalid, where we incubate both the framework and practice of Disability Justice, this burgeoning framework has ten (10) principles, each offering new opportunities for movement builders:

be a site of privilege or oppression. The fulcrums of oppression shift depending upon the characteristics of any given institutional or interpersonal interaction; the very understanding of disability experience itself being shaped by race, gender, class, gender expression, historical moment, relationship to colonization and more.

function differently in various environments. Access needs can be articulated within a community and met privately or through a collective, depending upon an individual’s needs, desires, and the capacity of the group. We can share responsibility for our access needs without shame, we can ask our needs be met without compromising our integrity, we can balance autonomy while being in community, we can be unafraid of our vulnerabilities knowing our strengths are respected.

This is Disability Justice, an honoring of the longstanding legacies of resilience and resistance which are the inheritance of all of us whose bodies or minds will not conform. Disability Justice is a vision and practice of a yet-to-be, a map that we create with our ancestors and our great grandchildren onward, in the width and depth of our multiplicities and histories, a movement towards a world in which every body and mind is known as beautiful.