Other Worlds is a collaborative that works to inspire hope and knowledge that another world is possible, and helps build…
http://www.otherworldsarepossible.org

What is the strongest asset of your community?
Its members, who give everything they have with courage, commitment, and faith in the belief that, if united, we can change the world.

Who are your real-life heroes in your field?
I could name enough to fill libraries, so I will use my two sentences to speak of just one close friend and real-life hero: Berta Cáceres, a Lenca leader of the land reform, indigenous rights, and democracy movements in Honduras. For her troubles, Berta’s life is currently precariously on the line, and she is living underground.

When and where did you feel most fulfilled in your work?
Back story: I was on the staff of President Aristide of Haiti during and after the three years of a hellish US-backed coup d’état. Most fulfilled: After unquantifiable deaths and suffering, global and Haitian political pressure succeeded in reversing that coup and restoring democracy.

What is the trait you most deplore of your field?
I most deplore the violence that continually meets movement activists. An untold number of my dear friends and colleagues have been arrested and tortured, some assassinated.

What is one thing you wish the general public knew about your work?
The idea that profound transformation is possible is not a pipe dream. We know that large-scale poverty and inequity are the result of policy choices, and therefore we know that different choices can yield different outcomes.

If funding were no object, what would you do?
The exact same thing I’m doing now.

Favourite moment at work?
My favorite moment at work is when we learn of, or get to be part of, a victory in which the odds that everything might be lost are reversed. We see repeatedly that people who have almost no resources or power can create such victories with unity, persistence, and good strategy.

Favourite song?
Ella’s Song by Sweet Honey in the Rock, named after the great civil rights leader Ella Baker. It was the theme song of the Wild Rumpus Revolutionary Summer Camp that two of my Other Worlds sisters/coworkers and I organized, in our off time, for our favorite little tykes in New Orleans last summer. (Illegal sentence three: The kiddos sometimes jazzed up the refrain with such variations as, “We who believe in lizards cannot rest until they come.”)

Favourite activist?
Of the many, one is Dennis Brutus, a close friend and extraordinary anti-Apartheid and global justice leader from South Africa. His body is dead, but his spirit and message live on powerfully.

Favourite historical figure?
My favorite historical figure will surely not be known by anyone reading this, but it is Father Antoine Adrien, a Haitian liberation theology priest and spiritual and political leader, now deceased. He took me under his wing from the time I was 21, served as my primary mentor, and continues to guide my work every day.

What did you eat for dinner last night?
I shared crab bisque – being in New Orleans – with my darling 88-year old mother.

If you could give $10,000 to any organization besides your own, which would it be and why?It would be to the Council of Indigenous and Popular Organizations (COPINH) of Honduras, run by the aforementioned Berta Cáceres. In a country with the greatest violence of any in the entire world except those at war, COPINH burns like a flame of hope for justice for indigenous peoples, campesinos, and women.

What book are you reading right now?
The Insufferable Gaucho by Roberto Bolaño.

What’s your favourite online resource for fun?
My siblings, who send me videos and photos of my 17 beloved nieces and nephews. They rock my world with hilarity and delight.

What’s your personal motto?
We are only limited by the size of our vision. 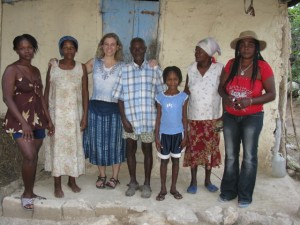 Beverly Bell is the coordinator of Other Worlds and Associate Fellow at the Institute for Policy Studies. She has worked for more than three decades as an organizer, advocate, and writer in collaboration with social movements in Latin America, the Caribbean, Africa, and the U.S. Her brand-new books are Fault Lines: Views across Haiti’s Divide (Cornell University Press) and Harvesting Justice: Transforming Food, Land, and Agriculture Systems in the Americas (Other Worlds, co-authored with Tory Field).

Other Worlds' Call to Action on the Honduran Government

It is urgent that the Kindle community joins us in calling on the Honduran government and US officials to respect the rights of indigenous Lenca people and demilitarize Rio Blanco, where COPINH (referenced in Bev’s interview) have for two and a half months blocked the construction of an illegal hydroelectric dam on their territory.